Cleverly and Bellew meet in a big
“Battle of Britain” at the Liverpool Echo Arena on Saturday 15th
October, but it wasn’t the boxers trading punches early!


Cleverly’s father and trainer Vince
got into a row with one of Bellew’s entourage in the press conference
room while the boxers were doing their one-on-one interviews. 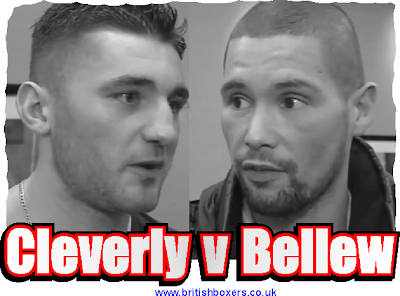 Vince was raging when he thought one of Bellew’s team was making fun of him and had to be restrained from going over to him.


At one point the volatile trainer was punching himself in the face while a shocked Nathan was speaking to TV crews.

Calm was restored when a unit of police officers’ arrived on the scene and spoke to both parties.

Nathan said, “I was a bit taken aback by what was happening and tried to keep focused on my interview,”

“I didn’t see what happened to make
my dad go off like that, but he’s a passionate person and he probably
got a bit over excited,”

“You’d expect this sort of stuff to
happen at an American press conference with Floyd Mayweather’s dad or
something, but not in Cardiff”

“Bellew could cause trouble in an empty room, but he’s got a whole lot of trouble with me on October 15th now.”

Bellew said, “My team were behaving themselves, it seems to me that Cleverly’s dad was trying to rattle us ahead of the fight,”

“I was doing interviews when a saw a
load of coppers burst into the room and I thought it was a wind up at
first as part of the publicity then I realised it was serious,”

“It was all sorted out calmly and I finished my interviews and we all drove back to Liverpool,”

“At the end of the day it’s me and
Nathan who are going to be fighting, he won’t be able to call the police
to help him out and this has just made me more determined to win that
world title.”


This will be the last time that Cleverly and Bellew will see each other again until the week of the fight.

Last week Bellew provoked the
unbeaten Welshman at press conference in Liverpool when he stuck his
head into Cleverly’s during the head-to-head photos.

And in May the pair got into an
explosive slanging match at a press conference in London when Bellew was
going to step in to fight Cleverly when then WBO World Champion Juergen
Braehmer failed to arrive.