Ricky Burns vs Michael Katsidis for the WBO lightweight title 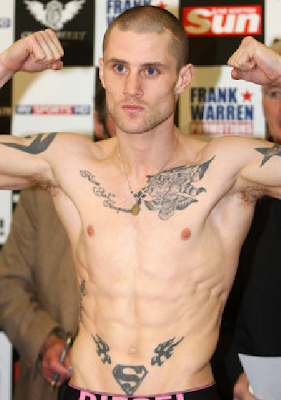 Scotland’s Ricky Burns is to give up his WBO super featherweight world belt and move up to lightweight, after out growing the division and will face Australian brawler Michael Katsidis for the vacant WBO lightweight title at Glasgow’s Kelvin Hall.
The fight date is not yet set in stone but a preliminary date of November 12th at Glasgow’s Kelvin Hall is in place. The chance for the title comes after Mexican Juan Manuel Marquez gave up the belt recently.

The 28-year-old Coatbridge man was due to defend his super-featherweight title against American Adrien Broner but his manager Alex Morrison has confirmed that it was becoming difficult for his fighter to make the 130lb limit and that he will now face Katisdis instead at the higher weight class.

Burns (above) will hope that The Kelvin Hall, where he won his world title in 2010 against Roman Martinez, will again be one of victory and world title glory, in what promises to be a intriguing fight of boxer vs fighter and a hard baptism for Burns in the higher division against one of its hardest competitors.

“Ricky has always wanted to move up to lightweight.” said Burns manager Alex Morrison.
“He has outgrown the super featherweight division.

“We have had confirmation through from Frank Warren’s people that Ricky will now face Katsidis (right) in November.

“The lightweight title is vacant just now and we are all agreed that this is the best fight for Ricky in the long run.

“As Ricky gets older he is struggling to make the weight for his current division and the next sensible step seemed to be to move up to lightweight.

“I don’t think he will have any problems in this division as he has always been big for a super-featherweight and he is a hard puncher.”

“There are a few things that are subject to change but at the moment we are pleased that Ricky is going back to the Kelvin Hall.” added Morrison.