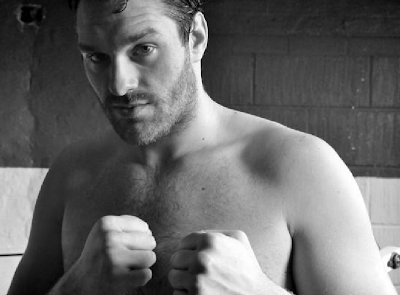 Busy heavyweight Tyson Fury will fight Canadian champion Neven Pajkic on November 12th, when he makes the first defence of his Commonwealth title at EventCity in Trafford Park, Manchester.
Pajkic 34, has an identical record to British champion Fury, with both racking up 16 straight wins and no losses and both have exchanged a war of words since Fury boxed in Canada in December last year and it is a feud that as eventually brought the pair together.
It will be Fury’s first professional fight in his birthplace of Manchester and promoter Mick Hennessy believes that although it will be a tricky encounter for Fury (16-0, 11 KOs) to overcome, he is a throw back fighter who has done things the right way and works to a strategy that will see him eventually crowned the No1 heavyweight in the world.
“Once again, Tyson will be fighting a dangerous, undefeated fighter,” said promoter Mick Hennessy.
“In his last six fights, including the upcoming one against Pajkic, Tyson will have fought four undefeated fighters (14-0 Dereck Chisora, 13-0 Marcelo Luiz Nascimento and 12-0 Rich Power), which is unheard of for a top heavyweight coming up the ranks.
“Tyson is old-school and he’s doing everything the proper way. I honestly believe that, within 18 months to two years, not only will he be the No. 1 heavyweight in the world, but the biggest name in the sport as well.
“Fury vs. Pajkic is another great fight for Channel 5, it is an absolutely explosive grudge match that shouldn’t be missed.”
The 23-year-old Fury is currently ranked No.13 by the WBC and No.15 by WBA and is one of the heavyweight divisions hot prospects. He captured the British & Commonwealth titles in July this year by outpointing the previously undefeated Dereck Chisora over 12 bruising rounds in London.
In his last contest on September 17, Fury stopped Nicolai Firtha (20-8-1) in a thriller at the historic Kings Hall in Belfast.
Pajkic (16-0, 5 KOs) nicknamed ‘No Surrender’ – is originally from Bosnia, but defected to Canada in 1996 during the war going on to capture top honors at the 2004 Ringside Tournament, which was the highlight of his amateur boxing career.
Now living in Toronto, Neven is the reigning Canadian heavyweight champion whose most notable victims have been Nicolai Firtha, Johnnie White, Raphael Butler, Jason Gavern and Grzegprz Koelsa (twice).
Who is Nevin Pajkic? – Profile Video

“I’ve never seen Neven show this much anger towards any other fighter,” said Pajkic’s promoter Rick Smiciklas.
“It all started when Tyson called out Neven, who then flicked his towel at Tyson, and it’s grown from there. Neven can’t stand Tyson.
“Calling it a bitter rivalry is weak. Now, they can settle their bad blood in the ring. It’s going to be a fun night. They each have a lot of energy. Both are charismatic and speak very well. This is a fight that’s going to be good for boxing and both guys.”
Also scheduled to fight on the Nov. 12 card in Manchester is the very talented and exciting, undefeated super bantamweight prospect Kid Galahad (10-0, 4 KOs), of Sheffield)
The full card will soon be announced. All fights and fighters are subject to change.
Tickets, starting at £30, will be on sale from midday today (Wednesday 12th) and may be purchased via Hennessy Sports Box Office 01925 755 222, Ticketline.co.uk 0844 888 4402, Ticketmaster.co.uk 0844 847 2500 and online at www.HennessySports.com.
Doors open at 5 PM with the first bout scheduled to start at 5.30 PM.
The Nov. 12 telecast will also be available in Canada to all Super Channel network subscribers.
Go on line at www.HennessySports.com for more information about Fury, his fight vs. Pajkic, or any Hennessy Sports boxers and events.
Fight pic Tyson Fury, courtesy of Andy Gray www.boxingportraits.com
Full fight report to follow from www.britishboxers.co.uk