When former Welterweight champion Ross Minter retired from the sport back in 2009 off the back of a nine year professional career that saw him claim both the Southern Area and English welterweight titles and challenge for world honours against WBU champion Michael Jennings, he felt that although his exploits inside the prize ring had come to a slightly premature end through injury, there was still a burning desire inside himself to be involved in the sport that had been part of his life from a very early age.
So when Minter like many other former professionals decided to pursue the next chapter in his career on the other side of the ropes as a promoter teaming up with promotional partner Alan Foley to form the new Queensbury Boxing League it seemed a logical choice for the 32 year old.
But it was Minters choice of promotions that began to raise a few eyebrows within the boxing establishment when he revealed that he would not be following the traditional route by joining the professional boxing promoters ranks, but in fact he was starting a completely new boxing organization and governing body within the UK that was being carefully developed by himself and Foley to bridge the gap between the traditional Amateur and Professional governing bodies and provide the first legitimate platform for boxers outside of the two aforementioned organisations to compete on.
What started off as an idea just over two years ago has now flourished into one of the most talked about promotions in UK boxing and with the league now firmly established and being covered by Sky’s Premier Sports, the promotional partnership believe the Queensbury Boxing League is set for huge things in 2012. – At the heart of Minters creation was the desire to fill a void he felt was wide open within the sport in the UK and establish something that would truly offer boxers something exciting to be a part of.
“What we set out to do with the league was to create the first legitimate boxing organization outside of the already established amateur and professional associations that would offer boxers an exciting and professionally run platform for them to compete on.” said Minter.
“The whole idea is centred on putting on straight 50/50 matches where every fighter is matched according to experience, weight and boxing ability and the fighters move up the league table according to their results and eventually challenge for titles you can use the analogy of the football league system in this country to put into context what we are trying to achieve with the league then it all makes perfect sense.
“For example you have the Premiership, the Championship and then the many leagues below that which still have players of a really good standard competing. But with boxing in this country if you’re not a professional but still want to compete and are not part of the ABA where do you go?
“That is where the Queensbury Boxing League comes in and offers all these fighters the chance to compete and be sure that they are being looked after.” added Minter. 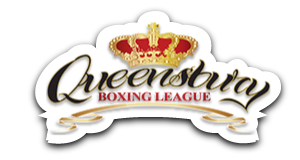 When the subject of how his new association had been received by the wider boxing establishment Minter was honest in his appraisal that not everyone had welcomed his idea with open arms, but that this was rapidly changing and that the response to the league two years down the line was nothing short of amazing.

“I’d be lying if I said we had not come up against some negativity from the likes of the BBBofC and a few others but once people have actually been to a Queensbury show they all come away saying the same thing that these are the best boxing shows they have ever attended and go away with a completely different perspective because they have seen it for themselves.” Minter went on.

“I can understand the opposition at first because they are judging the events on preconceived ideas that what we are doing is just unlicensed boxing which could not be further from the truth.
“Personally you won’t find a harsher critic of these unlicensed boxing events than myself because everything they do goes totally against what I think boxing is about. That type of show is thrown together with poor matchmaking, which is all done over a phone call with little regard for whom they are really putting into the ring, which results in complete mismatches and one sided beatings in many cases.
“The weights of the fighters competing against each other are completely different and the majority are more like street fights with gloves rather than a sporting contest.
“With the league every fighter who steps into the Queensbury ring has been personally seen by myself in the gym so I know exactly what we are working with. I watch them spar, train and get a complete history of what experience they have had previously so that is all taken into consideration when making the matches so I know each fight is a good even contest which will be fair, competitive and hopefully enjoyable to watch.
Relive the action and emotions from Queensbury Boxing league’s first televised promotion that aired exclusively on Sky’s Premier Sports.

“What we are doing is a massive positive for boxing and we are now starting to get the recognition for all f the hard work that has gone into making the league what it is.
With the league gathering momentum and more and more fighters joining its ranks, Minters partner in the league Alan Foley who heads up the promotional arm of the organization sees a very bright future for the events and believes it won’t be long before the league will be ranked equally alongside the other two governing bodies for boxing here in the UK.
“With the way things are progressing with the league and what we have planned over the next 12 months its only going to improve and get bigger and better. said Foley.
“We’ve got a huge pool of fighters involved now and more and more top class amateurs who are now starting to compete so the standard is just getting better and better.
There is still a huge amount of things to do to progress and take the league to the next level but the most important thing is people are now starting to take this thing seriously and with the passion Ross and I both have for the sport and the commitment to making it happen then I can only see things going one way and that is up. added Foley.
With the next event on the leagues busy schedule taking place on the 26th of November at the Effingham Park hotel in Copthorne West Sussex and a packed 2012 promotional calendar already confirmed, the next 12 months look set to provide some exciting times for the ambitious promotional duo and could see the league establish itself as an exciting addition to the UK’S boxing landscape.
By James Stivens