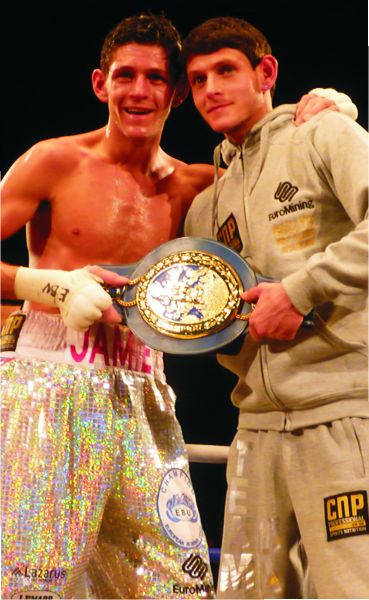 Original opponent Frenchman Malik Bouziane pulled out of the fight last week, leaving promoter Frank Maloney scouring Europe for a suitable challenger for Yorkshire favourite Jamie McDonnell defends his European title against Spain’s former European flyweight champion and WBO title challenger Ivan Pozo at the at the Hillsborough Leisure Centre in Sheffield tonight March 3.
McDonnell’s fourth defence of his belt. Pozo who rarely fights outside of Spain has a decent record of 32 fights, 6 defeats and 1 draw, but hasn’t had a bout for over a year. But his pedigree and the fact that McDonnell had been training with a plan in mind to meet Bouziane, could, but shouldn’t cause the much improved Doncaster boxer too many problems.

Since his early career defeat to Lee Haskins in March 2008, McDonnel has cut through the domestic and continental boxing ranks, storming to success with a a haul of belts. He claimed the British and Commonwealth titles by outpointing one of the most skillful British boxers in Ian Nappa, in January 2010 and two month’s later added the European strap against Jerome Arnould in his next fight in France, to claim an hatrick of titles.

McDonnell, is now considered one of the most improved British boxers plying their trade at present, and although the late change in opponent isn’t ideal for preparations, he is confident that the groundwork he has put in, will be enough to take care of Pozo.

Asked if Pozo’s different fighting style compared to that of Bouziane’s, who he had prepared to face all camp, would effect him, McDonnell is confident he has had enough time to make the necessary adjustments. “It’s disappointing a lot of what we’ve prepared has gone to waste but that’s boxing – I’ve had this before and I’ll probably have it again.

“It were disappointing, yeah. My training’s been for him, you know what I mean? It were tactics for Bouziane but it’s got changed at the last minute for a kid who can bang, who comes forward, who’s strong.

“But I’ve had a good eight or 10 weeks training so I’m fit, we just have to tweak a few things, move a few things round and we’re all good to go.

“I were down to fight this kid sometime before – I remember posters were done, so I’ve looked at him before. It’s not a massive shock; his style’s not out of the blue, he’s not no Lee Haskins.

McDonnell has been sparring with world-title challenger Rendall Munroe, and also with Wales’ up-and-coming super bantamweight contender Paul Ecomindes, who have provided McDonnell with a taste of what 32-year-old Pozo will bring to the table.

The champion also believes that Pozo’s punching power will put the fear in him to bring out the best in him a similar scenario to when he fought Stuart Hall last year to claim the Lonsdale belt.

“There’s probably a bit of fear, like [with] the Stuey Hall fight. When people can bang it puts a bit more fear into it. Bouziane weren’t a banger but he were good at what he can do, but this kid (Pozo) I think has knocked 20 out so he can punch, though that’s at a smaller weight.

“I don’t think he’ll have been in with anyone as big as me. But it’s put a bit of fear back into me – if he catches me, who knows? I’m looking forward to it now.

“It don’t put no more pressure on me – I know what this kid’s going to bring. I’ve trained for a hard 12 rounds. It’d be nice to get a stoppage but we’ve trained for 12 rounds – there’s no pressure there.

“If anything, it’s made me a bit more determined. He’s a decent kid, he’s been in with the best, boxed for a world title and is a banger. When I beat him it’s a good win so I’m really up for it now.

“That’s the sport we’re in – this sort of stuff happens. If you want to be the best and you want to be a champion, you just have to deal with it to the best of your ability.

“If you put the hard work in in training it’s going to pay in the ring, no matter who’s in front of you. Unless the style’s something out of the ordinary, you can deal with it. Them sort of fighters, you need a bit of time to work if you’re fighting them styles but you’ve just got to get on with it, it’s what you’ve got to do – it’s the job.

“It’s worked out alright, to be honest. It’s all about tapering down – I’ve done all of the hard work.

“I am confident that I can beat him. He’s 32 – he might be sliding – and I’m young, fresh and hungry. I’m just brimming with confidence now; I think I’ll do a good job on this kid. The better the opponent gets, the more I want it because you’re proving how good you are.

“I’m just looking forward to it – I think it’s going to be a cracking fight.” added McDonnell.
Prediction?
Expect McDonnell to win on points, but he may have to overcome some leg wobbling moments around the midway stage. His key is not to switch off and let Pozo get into the fight. It can be a comfortable nights work or a hard long battle. Either or, a win for McDonnell via decision is my choice. McDonnell deserves all the success he is getting, great lad!