Competing for the WSB Team Trophy, Dynamo Moscow will take on Dolce & Gabbana Milano Thunder at the ICC Auditorium, ExCeL London which will host the Boxing competition during the London 2012 Olympic Games in less than three months time.

The WSB Team Final will not only be the pinnacle of the boxing season but also a fantastic opportunity to witness the best Olympic boxers competing in an exciting and unique format.
The WSB is the only boxing league that brings together franchise teams from around the world to compete in five weight categories. Developed by AIBA, the International Boxing Association, the WSB is an innovative concept in the world of boxing.
It is the only pro style competition where boxers are paid yet retain their Olympic eligibility. It brings together the best National and Olympic boxers in a thrilling format appealing to boxing fans worldwide. The competition has been endorsed by nearly 200 National Federations making it an exciting future for the sport.
Talented fighters such as the Russian Lightweight Adlan Abdurashidov who finished the regular season ranked 1st qualifying for the WSB Individual Championships and Middleweight Aleksandr Ivanov who lit up the competition for Dynamo Moscow, are likely to feature in the team final line up. Other hopefuls are two reigning WSB World Champions supreme Middleweight talent Ukrainian Sergiy Derevyanchenko and Heavyweight superstar Clemente Russo for Dolce & Gabbana Milano Thunder, promising to make it a spectacular event.
“With the WSB Final being the pinnacle of the season, we decided to bring this fantastic show to the city whose heart will be beating for boxing in just a couple of months time. Great Britain is one of the hubs of the sport and we are convinced that fans from all around the country will come to the ExCeL to witness the best Olympic boxers competing in a pro format. We will also be unveiling the latest plans with regards to AIBA Professional Boxing. We look forward to seeing you all there”, stated Dr Ching-Kuo Wu, AIBA President and WSB Board Chairman.
Ticket Information

The Play-Offs consists of four quarter-finals, two semi-finals and one final match.

The final match will feature five fights, one per weight category. 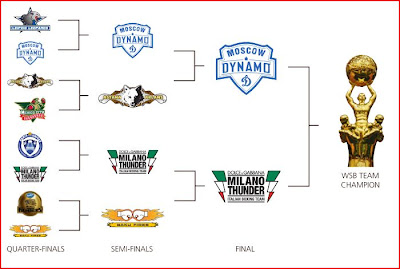 v  The ExCeL will play host to a further six Olympic events in 2012: Table Tennis, Judo, Wrestling, Tae Kwon Do, Weight Lifting and Fencing as well as 6 Paralympics event.

AIBA’s Development Project, the Road to Dream Programme follows the ideals of the Olympic Movement by contributing to the social improvement of boxers and their dream of being competitive at AIBA’s international events and Olympic Games.

On the night of the event, fans will be able to donate to the AIBA Road to Dream Programme