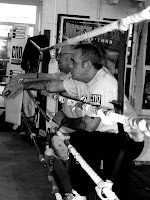 A self-confessed lover of nature and

opportunity to watch Mayweather in action and is excited about the

Now retired, although with his heart set on a comeback, Graham splits his time between the U.K. and U.S.A.; he witnessed Mayweather’s ability to dissect opponents first-hand when taking Hatton into a December 2007 WBC welterweight title showdown with “Money”. Hatton was broken down and stopped in 10-rounds that night, although many of his fans, Graham chief amongst them, believe that referee Joe “I’m fair, but infirm” Cortez did the British challenger a disservice by not allowing the two men to fight on the inside.

though, also recognised that the undefeated American had done his homework going into the fight with Hatton and has often stated that Floyd acts up for the TV cameras yet still prepares for each fight like a hungry challenger rather than an established champion.

However, Mayweather, 42-0 (26), may be the challenger in this fight, but Cotto, 37-2 (30), ranks well behind his opponent on any sane person’s mythical pound-for-pound list. For Floyd, this is all about picking up another belt and a W. On the other hand it is the culmination of Cotto’s professional career, a chance to finally put defeats to Antonio Margarito and Manny Pacquiao to bed and grab some elbow room at boxing’s top table.

It all adds up to an exciting night and one that Graham believes will once again prove that Mayweather is our generation’s top dog. “I saw Floyd on HBO’s 24/7 show and he looks quite big and powerful, he’s carrying the weight well [at light-middleweight] because he used to be a bit slight few years ago,” said Graham when speaking to Britishboxers.co.uk.

He added: “I’m a big fan of both guys and it could turn into a good fight because Cotto can bring out the best in Floyd if he goes for it because he’s a good pressure fighter, a good left hooker and body puncher.”

Cotto boxed on the move against Margarito, he is not quite a “Fancy Dan”, but the Puerto Rican has moved away from the pure pressure that he used in his early career, which Graham believes could be his undoing if current coach Pedro Diaz, who brought through many big names when training Cuba’s amateur team, has convinced Cotto that he can match Mayweather’s boxing brain.

“I think Floyd will find a way to win, he always does, and I just hope we get to see a good fight,” added Graham. “Cotto has to take it to him, that’s the only way. If he stands off it will be tough, he did well against Margarito in their rematch, and you can see why that style of boxing worked and got him the win, but if he tries that against Floyd he’ll get hit with pot shots all night long. Cotto’s defence is good, he holds his hands high, but moves his head as he comes in, so he can pull the pressure style off. If he boxes then my fears will come true. I hope someone doesn’t talk him into being cute with Floyd because he’ll get his head boxed off.

“No one can go on forever, the wheels always come off for fighters, but Floyd’s had a relatively easy career despite the names on his record and because of his style of boxing. Floyd is a master at creating space for himself, pushing guys back if they do get close, and if Cotto tries to be a master boxer all of the sudden then he’ll end up pissing in the wind. Cotto should do what he does naturally as it will make for a better fight even though Floyd will still catch him and slow him on the inside. Getting close to Floyd isn’t the problem – it is about what you do with him when you get him there.

“When [Arturo] Gatti changed his style it gave him longevity, but it took his offence away. Gatti could have made it tough [against Mayweather in June 2005] if he’d used his own style of fighting, but he tried to box with a master boxer and got cleaned out – Floyd’s accuracy took the wind from him and will do the same to Cotto. Plus it will be a boring fight if he tries to out-box Floyd, he’ll get out-pointed and picked off.”

Graham moulded Hatton into the type of pressure fighter the trainer loves to watch, instilling in his charge the need for good footwork when coming in and the ability to utilise head movement to avoid shots. A stylish boxer during his own professional career, Graham knows that pressure fighters can break a boxer’s heart if they do things the right way.

“Better than most,” said Graham when asked if he understands the intricacies of that style. “It is foolish just walking in with high hands and no head movement – I don’t believe in that type of pressure fighting. You think the shots will hit the gloves, but you end up getting caught coming in and out. Ricky Hatton wasn’t that type of fighter – you have to slip and slide, work from the guy’s lead.

“Cotto can do all that, he’s great at it, but whether he can do it against Floyd is another matter because no one has done it before and won. Cotto needs to slip in, apply pressure without crowding his work and fire singles. People talk about throwing punches in bunches against Floyd, but that just leaves you open for his single counters – it is all about getting your own single shots off in vital areas because you aren’t going to catch him with more than one punch at a time.

You’re fucking deluded if you think otherwise. “Cotto is very powerful, his rhythm is nice, but unless you’re Thomas Hearns you have to take it to Floyd because you’d have to massively out-reach him, and be able to use that reach, to out-box him. I just hope that Floyd boxes like he did last time [when knocking out Victor Ortiz in four last September], he showed a lot of venom in there that night – I liked that.

“Floyd took the bull by the horns that night, planted his feet and fired off right hands. People tried to slag him for knocking Ortiz out after touching gloves [after Ortiz had deliberately butted Mayweather], but if he was my fighter and came back to the corner after getting nutted and not getting his shots in on an open target I’d have given him a bollocking. Floyd did what any fighter would have done. I hope he has the same venom in this fight.”

Speaking of referees, the appointment of Tony Weeks has pleased Graham, who still feels that Cortez didn’t allow Hatton to work in close against Floyd; he also feels that Hatton’s underrated boxing ability is finally being acknowledged.

“It is still a sore point for me because of Cortez, but it is about time that people look at Ricky properly and the way he fought and see he was different than all the guys who box in a pressure style,” purred Graham.

“Ricky had short arms and was quite short so of course he would get caught sometimes, but he slipped and slid his way in using movement and had fantastic anticipation and reflexes, not to mention that he was a wicked body puncher. Against Floyd, he wasn’t allowed to fight, but Cotto should look at how Ricky closed the gap and hope he is given the chance to work inside before Floyd ties him up. As I said, the last thing he should do is try boxing with Floyd because out-boxing Margarito is different to trying to box with him.”

Still, the figure of Manny Pacquiao looms large over the occasion. Although the Philippine fighter has lost a bit of form in recent fights, a showdown between him and Mayweather would be a huge shot in the arm for the sport. Pacquiao takes on Tim Bradley on June 9 and many feel that Mayweather has to meet his long-time rival in order to secure his legacy. Graham disagrees with this assessment.

“No, he’ll be recognised anyway because you’d have to go some to beat him – I’d put my money on Floyd against most,” said Graham when asked if history will look unfavourably on Mayweather. “I think the likes of Hearns, Sugar Ray Leonard and others with their gifts could have done it. For instance, Thomas had boxing ability and deadly power, so he could use the range well without leaving himself open then put over his right hand.

“Leonard could match Floyd for speed, power and was tough as fuck himself. I’d rarely back against Floyd as things stand, but time will eventually beat him because it beats everyone else. Floyd is an all-time great, if people don’t see that then it makes a mockery of everything boxing is about because he’s beaten everyone he can beat apart from Manny and done it in real style.”