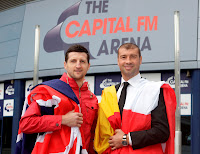 Matchroom’s Eddie Hearn has revealed that Carl “The Cobra” Froch netted huge TV viewing figures when defeating Lucian Bute at the Nottingham Arena to pick up the IBF super middleweight title on Saturday night.
Froch became a three-time world title-holder and moved to 29-2 (21) courtesy of a dominant fifth-round stoppage of the previously undefeated French Canadian – who is now 30-1 (24) – in front of a raucous crowd and a Sky TV viewing audience that peaked at 668,000 despite the fight taking place in the early hours of Sunday morning.
A delighted Hearn confirmed the news when speaking to Britishboxers.co.uk over the phone on Monday. “Carl is without any question Britain’s number one fighter,” said Hearn. “You simply cannot say otherwise – it is impossible.”
He added: “We’re looking at the viewing figures – Carl’s smashed everything. Kell Brook did well against Matthew Hatton [with  477,000 peak] the other week, but Carl’s taken it to another level. We’ve just got information from Kantar Media showing a peak of 668,000 [Dan Horlock of TV Sports Markets has reported a BARB peak of 576,500] for a fight late at night, which breaks everything that has gone before.”
Courtesy of Rick Reeno and www.boxingscene.com
Please send news and views to neckodeemus@hotmail.co.uk or Twitter @Terryboxing.