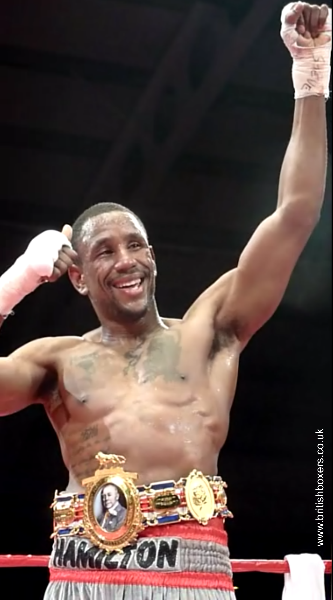 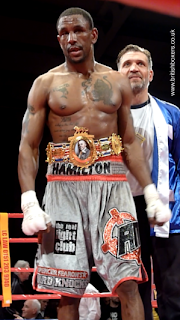 After beating former British champion John Watson just three weeks prior, the 33 year-old Hamilton was rewarded with this big chance and Lonsdale belt opportunity, when original challenger to Theophane’s reign, Steve Williams had to pull out of the fight with illness.Bristol’s Darren Hamilton pulled off the unlikeliest of victories on Saturday night when he stepped in with just a weeks notice, to take the British light-welterweight title off champion Ashley Theophane at the Aintree Equestrian Centre in Liverpool.
Hamilton set about his task well from, start, middle and end. The boxer promoted by Spencer Fearon and trained by the experienced Harry Andrews, never slacked, never stopped working, never stopped believing and made his dreams come true..
In truth it was a very hard fight to score, with nothing in it; in the way of anyone taking the upper hand. It was always very close, but Hamilton just seemed to land the extra punch or two coming in and out of the exchanges; and without actually scoring it round by round, my feeling and view was Hamilton had done enough at the final bell.
The focus in Hamilton and his work ethic was reflected in Theophane’s apparent lack of spark. The Londoner started the early rounds like he was pacing himself, maybe to come on stronger in the latter sessions against the less experienced Hamilton. But Theophane; and I had noted, ‘had started the fight in first gear and coasted through the rest of it without ever going through them.’
Theophane, 31, had the chance in this is third defence of the Lonsdale belt, to claim full ownership of it with bigger fights guaranteed and will look back on the night as a chance gone begging. – You always felt the champion was going to be too good for Hamilton, who although a good boxer was considered levels below. But Theophane never got to grips with the new champion’s style and wasn’t willing to step it up or take the upper hand, almost wary of Hamilton… 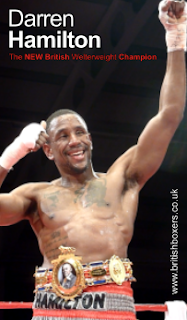 Maybe it was the late change of opponent that had a negative impact on Theophane and his performance? Having had a full training camp based around beating Steve Williams, it mustn’t have helped psychologically for him. That’s taking nothing away from Hamilton, who ceased his moment and turned his life around.

Hamilton had started the fight very well and his good jab and sneaky right hands were landing accurate and with effect. Theophanes left eye started to see the copious of Hamilton’s accurate shots and swelling was evident early on. Theophane’s corner had to work hard all fight with the endswell to keep his tightening skin down and his tumefy eye damage from getting worse.

At the final bell Hamilton and his team mildly celebrated with an air of incertitude, while Don Charles, Theophanes coach lifted his fighter on his shoulders, nearly dropping him as the pair struggled to find their centre of gravity on the Las Vegas style red canvas of the Liverpool ring.

After the decision was announced, such was the overwhelming joy, emotion and shock that came over Darren, he immediatly jumped out of the ring and ran off up the gantry, only to be got hold of and taken back into the ring, to adorn his new Lonsdale belt around his waist the old fashioned way, a nice touch and change to the new over the shoulder option. Darren wore it with pride with a smile that stretched from ear to ear.

Hamilton was homeless a few years ago a boxer going nowhere and sleeping at his gym. Since joining Spencer Fearon and his ‘HardKnocks’ boxing outfit, he has turned his career around and buoyant on the enthusiasm and energy that Fearon and his team project he became their first British champion and boxing talisman.