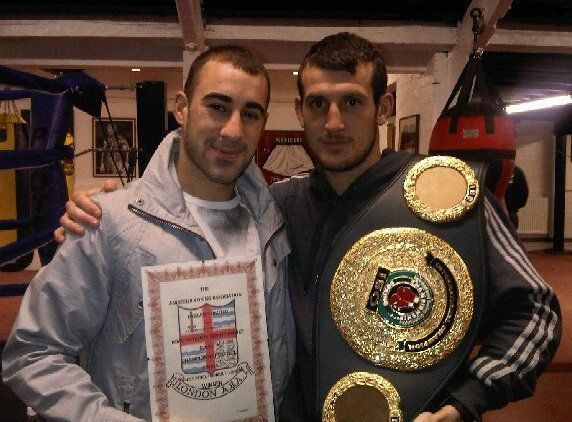 Sean ‘Masha’ Dodd is a switch hitting prospect from Birkenhead on Merseyside. Trained by Sean Trodden, Danny Kelly and the team at the long standing Venture ABC Boxing Club in his home town.

‘Masha’ a well grounded man and decorated amateur for the club, not only trains himself at the Venture, but takes part as a qualified coach, in teaching the 100’s of local kids who come in and out of the doors of the Brassey Street gym.

Sean, 27, turned professional in March this year, with a 4th round stoppage of Scotland’s Giuseppe Daprato. That debut night in Chester, Sean brought an army of fans with him, who brought the house down at the Northgate Arena in Chester.

The Wirral boxer, who says Liverpool’s Derry Mathews is his boxing hero, always took a dedicated following of family and friends with him where ever he fought as an amateur, and his journey through the pro ranks looks like it will also be followed every step of the way by his loyal bredrin.

‘Masha’ started the sport late, aged 24, after never having laced on the gloves before. He went on to rack up 19 vested fights, 17 of them by stoppage, impressively winning the 2010 ABA national Senior novice Class A and then the following year he became the Senior novice ABA champion capping a whirlwind start to his boxing life.

Sean, a former roofer by trade is now a full time pro and lives and breathes the sport he found late, but now loves. He admits to going off the rails along the way before finding pugilism, his first sport was football, playing semi pro for a lot of the local teams around Merseyside.
But his lifestyle was getting out of hand, he would get into constant fights on the pitch, in nightclubs and on the street and Dodd knew that he wanted something different from life and was determined to change his destiny.
A visit to an amateur boxing show with his uncle changed his life path forever.
Sean took an instant like to the sport and the following week was at his local boxing gym the Venture. Little did the coaches there know when Sean put his hand up on his first night at the gym, when asked; ‘who would like to get in the ring and spar’ that he would go on to represent the club and its future success.
“I used to make enemies on the football pitch and then I’d be out drinking on a weekend and getting into trouble, but once I started boxing all that stopped,” Dodd, now 27, explained.
“I wasn’t really a massive boxing fan but I went to the show my uncle told me about that Birkenhead Venture Boxing Club were putting on. I watched the boxing and I thought ‘I’d love to have a little go at that’.
“It inspired me so I spoke to the coach Sean Trodden and he said I should come down the gym on the Monday. I’ve loved it ever since and it’s changed my whole life around. I realised that you have to be 100 per cent dedicated to do it, no time for messing around.”
That dedication to the sport continues this Saturday night (May 19) when Sean has is second paid fight against Kristain Laight on the undercard of David Price and Sam Sexton’s British and Commonwealth heavyweight title fight at Aintree. It is a big bill for Sean to showcase his talents and one he is excited about performing on.
Sean isn’t one of them lads who is quietly confident, he isn’t the type to blow his own trumpet and say look at me! So we’ll do it for him… He is a genuinely nice guy with a warm personality and a quiet confidence and pose of someone who has found there vocation and purpose in life. Sean says he is in his dream job as a professional boxer and feels after a few years of insecurities and no direction, he has finally found, not just a sport that he loves and lives for, but he has also found his vocation in life and more importantly himself.
For the rest of Sean’s story and in depth interview and profile on ‘Masha’ Dodd please watch the video above and you can follow his progress in the fight and the rest of his career right here at BritishBoxers.co.uk