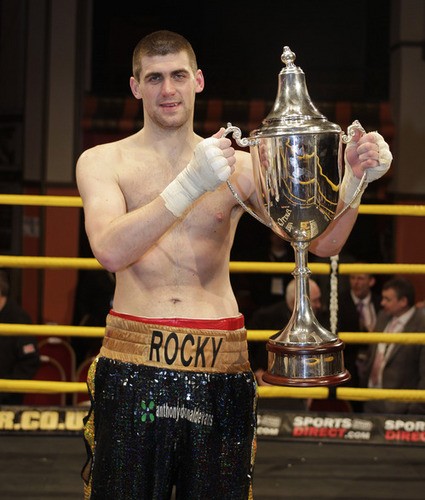 Interview with Rocky ‘From Stocky’ Fielding

All time favourite fighter: Probably Mayweather. I like that cockiness!

All time favourite fight: Those Gatti-Ward fights.
Which current match would you most like to see made? Same
as everyone. Mayweather-Pacquiao. Pacman’s brilliant but Mayweather’s
even better, has a bit more skill. Floyd wins a tough, close fight.
What is your routine on fight day? I’ll wake around 8ish, have something like scrambled egg on toast for brekkie, then lounge in bed until 11 or midday. After, I may have a game of snooker with me mates.   Throughout the day I’ll have proteins; pasta, cous-cous and get loads of fluids back into my body. I’ll stop eating two hours before I leave for the venue. I’ll try and have a couple of hours kip in the afternoon or just ‘chill’ with me music on. I always leave from my mum’s house not mine. It’s just a routine. I’m very relaxed. In fact, I’d like to be a bit more nervous! At the arena, I start to get excited. I’ll lace me gloves then, from the first shot I throw on Oliver’s pads, the nerves kick in and I’m ready to go.
Entrance music:  The ‘Rocky’ theme tune.
What are your ambitions as a boxer? By the end of 2012, I’d like to have won a couple of belts; maybe an Area or English title. Frank and Oliver will know when I’m ready to step up for the British. Ultimately I want the British and Commonwealth then hopefully the European and world titles.
How do you relax? I don’t get much free time because, except for a couple of weeks in August, I’m always training, always ticking over. I like to go away on
holidays with me girlfriend or play snooker or pool and have a pint with me mates at the local pub. Sunday mornings, I like to watch the lads play footy. I’m always itching to get on meself but can’t take the risk.
Football team: I like both Liverpool and Everton to do well but I’m mostly Everton. I had a season ticket as a kid and was on their books when I was 11 to 12.
Without being big headed, I was a good kid; leading goalscorer and Player of the Year every season. Me Dad withdrew me (from Everton) because, at that age, he just wanted me to enjoy me football. Several lads in the same club team I played for are in the (Football) League now, earning good money, and I was just as
good as any of them!
Read: I don’t! I’ve not got the patience. I recently got The Four Kings (by George Kimball) about Hagler, Hearns, Leonard and Duran on Kindle recently but couldn’t get past page two. No pictures!
Music: Justin Bieber and JLS. Seriously!
Films/TV: I don’t really watch films. I watch loads of old fights and those HBO 24/7s on You Tube to pick up training tips. On the tele, I watch loads of sport and I like me soaps; Emmerdale, Eastenders and Corrie.
Aspiration in life: To achieve all the things I want to achieve, through hard work. To live in a big mansion with a swimming pool!
Motto: Train Hard, Fight Easy!
The debut of BoxAcademy will be broadcast live on BoxNation (Sky Ch. 456/Virgin Ch. 546) this Friday starting at 7.30pm.

About BoxAcademy Queensberry Promotions presents the first installment of a new concept show that will be televised Live and Exclusive on the UK’s new home of boxing, BoxNation.

BoxAcademy will be a monthly live show that is solely dedicated to showcasing the most exciting, young, up and coming domestic talent in tougher, more action packed fights,  designed to develop the young fighters at a faster rate to Championship level.

On one Thursday every month, BoxNation will switch the focus from its huge array of World, British and European title contests, and give the floor to  a host of former Olympians, amateur champions and unbeaten prospects, as the UK’s elite young talent is given the chance to be the main focus of the show in BoxAcademy.

BoxAcademy will visit the various regional hot-beds for young boxing talent around the country, visiting a different city each month.

BoxNation’s televised coverage of BoxAcademy events will be supplemented with an array of behind the scenes interviews, training footage and background
stories, giving viewers the chance to get to properly know tomorrow’s champions.