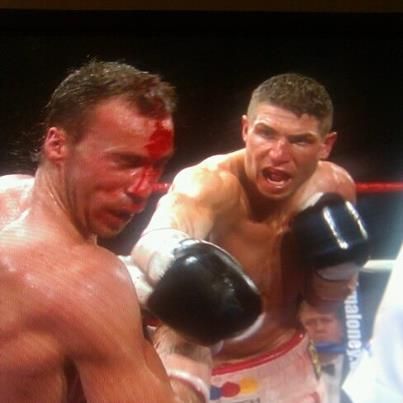 Brian ‘The Lion’ Rose successfully defended his British light-middleweight title for the second time on Saturday night, with a unanimous points decision over Kris Carslaw at the Bowlers Arena in Manchester.

Carslaw, 27,  pushed the champion all the way and had his moments during the middle part of the contest, being a constant tricky puzzle for the well schooled champion. And Rose found out early that the tough switch hitting Paisley fighter, had come prepared and determined to take the Lonsdale belt back with him over the boarder.

Rose, 27,  had prepared for a southpaw Carslaw, but the challenger boxed most of the fight from an orthodox stance, throwing Rose slightly, who afterwards admitted that Carslaw was the most awkward fighter he had ever boxed. Being a former kickboxing champion, you could see Carslaw still held some subconscious martial art manoeuvres and his method gave the champion plenty to think about.
Rose from Blackpool, had expected Carslaw to step in with his left back hand, simultaneously bringing his left leg in front of the right, leaving him off balance and wide open for the left hook. Rose had practised rolling out has he threw it in training, but Carslaw changed the script and Rose had to improvise his way through the fight as Carslaw gave him one of his toughest tests to date.
Rose had sparred with European champion Kerry Hope and the former decorated British champion Jamie Moore, both southpaws in his preparation, included a stint working in Portugal. But Carslaw decided he would throw Rose’s plans up in the air and being as comfortable in any posture, chose orthodox as his primary starting position.
Rose began the fight well behind his high peek-a-boo, tucked up defence and was landing the scoring shots, that were keeping Carslaw off balance, while he caught his opponents counter punches on the arms and gloves.
Carslaw suffered a cut on top of his head in the third round, after he came in low and planted the nut on Rose accidentally, coming off worse from the clash heads. The blood instantly flowed in rivers of red that poured down the face of Carslaw and into his mouth. He admitted after the fight he had been swallowing his own blood, it was running down his face so much. His cut man Benny King worked wonders to help stem the flow, so much so that Carslaw eventually was able to see the final bell.
From getting the cut it was like Carslaw became void of his pre fight plan and fought as though the referee had only given him only another couple of rounds, because of the cut. He began to then hurry Rose, coming in from different angles, fainting and and stifling the champion who lost his early grip on the fight.
Rose was always set in counter punch mode and it was there where he found his key to victory, but Carslaw double jab and follow up shots, had Rose constantly setting himself and working out what his challenger would do next. It became messy at times but it was Rose’s quality and accuracy of punch that were the key to his eventual victory. But it wasn’t vintage and ‘The Lion’ had to really dig deep to hang onto his British belt in the end, after a spirited effort from Carslaw.
After three long hard consecutive training camps and fights within a six month period, It did look like Rose, who had only had one week off from camp since beating Prince Arron in December last year, was a little jaded and battle worn. That is taking nothing from Carslaw who would certainly give any domestic light-middleweight a run for there mon ey, such is the desire of the man.
But the sign of a champion is to pull through at all costs when up against it and Rose dug deep and used all his experience and cool under pressure, to come through, eventually showing his class to finish the fight strong and take the verdict on the cards and his treasured belt home with him.
The judges scored it 118-112, 116-113 and 115-114 – in the end, all in favour of the champion.
Next up for Rose will be a mandatory defence against former champion Sam Webb, who won an eliminator recently against Matthew Hall. Rose will have some time out before getting prepared to take on Webb, knowing a win against the Chislehurst man will reward him with not only the Lonsdale belt for keeps, but a real shot at the big time and the fights that he hopes will secure his and his family’s future. – Enjoy your rest Brian, you deserve it.