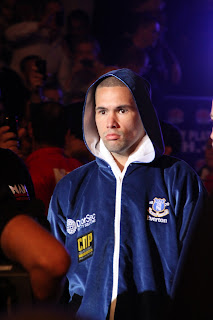 Eddie Hearn of Matchroom Sport has confirmed to BritishBoxers that Liverpool’s light-heavyweight hope Tony Bellew will co-headline their September 8 show at London’s Alexandra Palace alongside middleweight contender Darren Barker.
Bellew, though, has not signed long-term promotional terms with Matchroom – the boxer has inked a one-bout deal after deciding to determine his contract with former manager Frank Warren and Frank Warren Promotions Ltd. earlier this year.
Bellew is expected to present his case for the determination of his managerial and promotional contracts to the BBBoC in August.
Bellew now joins Barnet’s Barker at the top of the bill and will take on former middleweight and super middleweight world title challenger Edison Miranda for the WBC’s Silver light-heavyweight title, which was contested by Mikkel Kessler and Allan Green on April 19 – a fourth round stoppage win for Kessler.
Miranda, nicknamed “Pantera” shot to prominence when breaking Arthur Abraham’s jaw en route to a decision defeat for the Germany-based boxer’s IBF middleweight title back in 2006.  This was followed by defeats to Kelly Pavlik, Andre Ward and then-IBF 168lb titlist Lucian Bute, with a second reverse to Abraham, this time by fourth round stoppage, thrown in.
Recent defeats to Yordanis Despaigne and Isaac Chilemba, both up at 175lbs, have knocked some of the shine off the former world title contender, but the free-swinging 35-7 (30) Columbian is still capable of detonating big shots, as he did when stopping Kariz Kariuki in five in December.
Hearn believes that the addition of Bellew, 17-1 (11), has sprinkled extra stardust onto the Sky TV show.  “I am chuffed to have made this fight,” said Hearn when speaking to BritishBoxers over the phone.
“I have watched Miranda numerous times on TV, he is a dangerous fighter, but Tony has acquitted himself at world level, so this is the type of fight he needs to get on the road to a world title.  Miranda is a name, he gets people interested and it is that type of crossover fight that people will come out and watch because it is a very exciting contest.”
As for Bellew’s long-term future, the popular Liverpudlian is due to go before the BBBoC in August as he bids to finalise his split with Warren, who has argued that the boxer is still under contract with him.  Indeed, the hearing should have taken place this week, but the delay has allowed Bellew to net this one-shot deal.  Hearn believes that the fans in attendance and those watching via the Sky cameras will benefit from this decision.
“We’ve got an agreement for this bout, a one-bout agreement, and Tony signed a contract for this one fight,” explained Hearn.  “Tony is a lovely bloke, we’ve spent a lot of time together and had conversations about him wanting to fight again to build on his [fifth round] knock out of Danny McIntosh in April.  I just wanted to help him get out again because he’s a great guy, a great entertainer and a very exciting fighter.  This is a fight he can get up for and it will be out the best of Tony Bellew.”
Barker, 23-1 (14), will vie for the IBF’s Inter-Continental middleweight title in his bout, a meeting with Italy’s national title-holder Simone Rotolo, who dropped a split-decision to Sebastian Sylvester for the EBU belt in 2007, but has motored to 7-0 since that loss – his overall record reads 34-3 (15).
“Barker is going to be fighting Simone Rotolo, who lost to Sylvester a few years ago, but is a tough guy,” said Hearn.  “We spoke to Craig McEwan and the like, but we need to fight for a belt and Rotolo is ranked highly enough to fight for the IBF Intercontinental title [Rotolo is ranked at number 8 in the organisation’s Intercontinental ratings].
“After making the Bellew and Miranda fight, we decided we didn’t need to get Darren involved in a barnstormer because it would put pressure on him when he’s fighting for the first time in nearly twelve-months and has just fought the best in the world [in Sergio Martinez].” He added: “It is still a very competitive fight, so Darren has been working hard in the gym and with a new conditioning coach to really make a statement in this fight.  It is difficult to match Darren because I want to give him a test, but don’t want him to go
life-and-death after so long out.  People talk about the [Matthew] Macklin and [Martin] Murray fights, which they wanted to make for December, but that isn’t the right time for Darren because he’s been out for a year and needed this fight against a tough
Italian to show what he’s been working on.”
Four further title fights and a few debuts will underpin the Barker and Bellew one-two.  “[Lee] Purdy [18-3-1 (11)] is going to defend his English welterweight title, we’re just confirming that at the moment, and there’s talks for John Ryder [11-0 (6)] to fight Kreshnik Qato 28-8 (5)] for the English middleweight title [currently held by Qato],” said Hearn as talk turned to the undercard action.
“Erick Ochieng [10-1 (3)] will fight Ryan Toms [11-2-1 (6)], who is the Southern Area light-middleweight champion, for the English light-middleweight title [Ochieng’s third defence of the belt] and Chris Evangelou [9-0 (1)] will fight Danny Connors [1-0] for the Southern Area light-welterweight title.  [Former amateur stars] Iain Weaver and Martin Ward are both debuting and we’ve got Ryan Taylor on there as well.  Every fighter on the bill is a ticket seller, so it is going to be a great night – six title fights and the joint main events are dynamite.”
Barker’s return and Bellew’s latest step will be one of the first major shows of the new season and since the Olympic Games – Hearn believes it will be a night to remember when the dust settles at the famous “Ally Pally”.  “To headline with Barker and Bellew, and have six title fights on there, shows this is a big night for London,” said Hearn.
Please send news and views to neckodeemus@hotmail.co.uk
or Twitter @Terryboxing
courtesy of Terry Dooley and Rick Reeno www.boxingscene.com