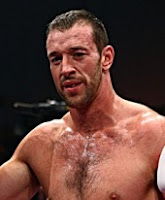 Enzo Maccarinelli the Former WBO cruiserweight champion has been given a six-month anti-doping suspension, by UK Anti-Doping.
The 31-year-old Welshman, who lost his world title to David Haye in 2008, tested positive for methylhexaneamine (MHA) on March 23 following his British cruiserweight title win over Shane McPhilbin.
Today Maccarinelli (left) issued a statement in light of the suspension insisting that he is extremely surprised and disturbed to have tested positive for a banned substance.

Following
my fight against Shane McPhilbin in March, I was extremely surprised
and disturbed to have tested positive for a banned substance known as
methylhexaneamine.

I
purchased a product called Dexaprine that contained this banned
substance from a combat magazine.  The advert stated that it was an
approved substance and I checked the ingredients which had no reference
to any banned substance that I was aware of.  In fact, it also stated
that it was suitable for athletes.

I
have since found out that this ‘fat burner’ contained a substance and
consequently I failed a dope test, albeit with a very low reading.

I
wish to state that this substance was in no way used to gain any
advantage in the ring or enhance my performance and whilst I appreciate
that it may look that way, I would certainly never cheat or cut corners
in my preparation.

I
have been tested over 20 times in my career and have never failed any
random or post fight doping test, but on this occasion, due to my
naivety, I have tested positive for a banned substance.

I
was contacted by UK Anti-Doping (UKAD) and helped them with their
investigations, where I gave them both the product that I had taken, the
container and also the advert from which I ordered these supplements.

The
explanation I gave which is reflected accurately in their formal
decision is evidence that my intention was not to knowingly take a
banned substance or to gain an unfair advantage in competition.

I
am very conscious of my reputation within the sport of boxing and even
prior to the decision, that has been released today, I promised to fully
accept any punishment that was given as a result of this positive test.

Furthermore,
I voluntarily vacated my British Cruiserweight Championship so to allow
my opponent, Shane McPhilbin, the opportunity to rechallenge for it
whilst I serve my 6 months suspension, as I could not bear the thought
of holding such a prestigious championship if anyone thought that I
hadn’t won it fairly.

I
have volunteered to assist UKAD in any way I can to prevent other
boxers or sportsmen from being  put in the same situation as I currently
find myself in due to the availability of what appear to be perfectly
legitimate supplements and manufacturers not making it clear on their
products that they contain banned substances.

UKAD
have accepted my offer and I am determined to ensure, along with the
British Boxing Board of Control that the awareness of such supplements
is enhanced and others do not have to face the humiliation that I now
have to.

I
would like to thank UKAD for their understanding and support in this
matter and their punishment which I hope reflects the honesty in which I
approached this situation.

I
would further like to thank Robert Smith of the BBBofC for his support
and apologise to everyone involved in boxing for any stain on our great
sport.