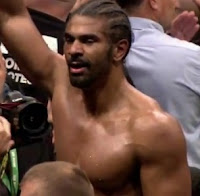 Months of hype,
some good, some bad came to an abrupt end Saturday night at Upton Park as over
30,000 saw David Haye Knockout former World title challenger Dereck Chisora at
2.59 of the 5th round.
The build up was ugly, the fight was not as the 2 leading
UK heavyweights waged battle over 5 surprisingly entertaining rounds. Many
including myself thought Haye would win, although probably needing to go
the full distance as Chisora had shown a rock chin in lasting the full 12 rounds
against WBC champion Vitali Klitschko.
Just before the fight, 15 mins in
fact, the rain came down heavy on the 30 thousand plus who attended Boxnation’s
massive outdoor show. Frank Warren must now hope that his channel really takes
off as he predicted that there would be NO rain come Saturday night. Michael
Fish and Co can sleep that wee bit tighter tonight. Mr Warren got it wrong
regarding the weather although he was right to stage this fight as it certainly
had the crossover appeal from the general public as many bought the Boxnation
fight and by the amount of celebrities at ringside.

The fight took the
shape that many expected, Chisora chasing David Haye around the ring trying to
get close and land his combinations whilst trying to avoid the powerful potshots
from the former World champion. Haye took the opener by being able to land the
odd jab and right hand although i scribbled down that Chisora was making Haye
work hard a la Jones vs Kell Brook last weekend.

The pace upped in round 2
where Chisora again did the chasing. This time he was beginning to trap Haye on
the ropes landing a few blows. Haye was smart though as he angled his body well
out of the way of Chisora’s right hand therefore making Chisora miss. This round
was much closer than the 1st but again Haye was landing more shots, it was
warming up very nicely.

Chisora had his best round in the 3rd. Del Boy
was now landing more punches inside, was the plan beginning to work?. Haye
fought back landing a huge right hand which Chisora to his credit walked
through. Chisora kept the pressure on and with ten seconds left in the round he
seemed to wobble Haye with a combination after a furious exchange. The Ref Luis
Pabon jumped in to signal the end of the round clearly unable to hear the bell
which i dont think sounded. With that little bit of luck from round 3 Haye got
back to boxing and picking his shots a lot better. The 4th was again close,
Chisora was well in the fight as he knew that if he could get Haye into the
later rounds then he stood a massive chance of causing the upset. I scored the
round for Haye, Chisora was pressuring but just not doing enough to win the
rounds.

Round 5 was good one, Chisora has finally caught up with Haye as
he was pushed to the ropes numerous times and forced to fight Chisora off him.
Was Haye getting tired? it looked like it until late in the round a massive left
hook thrown from a southpaw stance smashed Chisora to the deck. Chisora barely
got up, he was hurt badly against a fighter who has proved in the past a
fantastic finisher. Haye went for the kill, left hooks rights hooks bounced of
Del Boy’s head as he desperately tried to hold before BANG – another big right
hook followed by a sickening left on the way down send Chisora down for the
second time. Luis Pablon drafted in to replace Mickey Vann gave Chisora one look
and rightfully called it off, Haye was BACK and looking impressive
too.

After the fight it was good to see that there was no hard feelings
between the pair, both had hyped this fight to the max with their hatred of each
other but now it was only respect. Haye wants Vitali now or its back to
retirement, Chisora wants and needs a rest before making any decision on his
future. It was a great main event that the fans really enjoyed. Haye mentioned
that its was the best atmosphere he had ever fought in..

Below is my
scorecard for the fight along with all the press / fan scores i was able to
collect for this fight.

HAYE WINS BY
5TH ROUND KNOCKOUT

It seems a while ago since that crazy and controversial press conference in Germany, but I have been waiting for what seems like ages for this fight to take place. I was really excited to be given the opportunity to cover this amazing event.
The fight took place in the East end of London, at the Hammers stadium (which by the way isn’t a patch on Man City’s ground).
I arrived early and enjoyed the evening’s entertainment including some musical entertainment by various artists and some great undercard boxing. There was a great atmosphere at the event, and I had some fun spotting some of the notable people in attendance including tennis star Andy Murray, and Celebrity Chef Levi Roots.
Just as the main event was due to begin it started pouring with rain, Typical. As Michael Buffer welcomed the fighters into the ring, excitement grew and the rain was forgotten. A wave of excitement and energy erupted from the soggy crowd, and the fight started.
The Hayemaker made a statement to the rest of the division…. he’s back. David Haye dominated the fight against a somewhat complacent Chisora, finally knocking him down twice in the 5th round before the referee called off the action for a TKO victory. It was a very impressive performance for Haye, and great killer instincts to close the show.

Round 1:  Both fighters come out and start throwing some heavy shots. Haye lands a few clean ones, Haye is so much quicker and cleaner than Chisora, he anticipates and draws Chisora in. Things settle down a bit, and Haye works behind his jab and circles. Chisora keeps walking in and feinting, looking for an opening to try a big shot. I felt Haye won the first round.
Round 2: Haye is moving well, and is much quicker.  Chisora starts getting frustrated as Haye stays behind his jab. The fight heats up a bit as both fighters commit to try and land a clean shot towards the end of the round. They both exchange after the bell, and taunt.
Round 3: Chisora looks a bit more determined here, and is getting sick of hanging around. He backs Haye into a corner, but doesn’t land much. Haye uses his movement skills to manoeuvre his way out, and then lands a combination. Lots of holding and then breaking in the bout. Chisora commits and slugs at Haye and catches him. Haye looks a little shaken and slows.
Round 4: Now Chisora is throwing caution to the wind and committing to his shots more. He lands a few nice shots. Then Haye retaliates and starts launching his own blows.  Chisora backs off and covers up in the corner, I’m not sure if he’s hurt or if he is luring Haye in? but I think Chisora is hurt. Haye has the upper hand and knows it; he has a smug smile and sort of taunts Chisora.
Round 5: Chisora comes in swinging and misses. Haye backs up and lands a huge right, employs some clever footwork, and lands another big right hand. Haye is picking him apart, Chisora looks tired and like he’s running out of ideas, but he keeps trying. Haye lands a right hook that sends Chisora to the canvas. Chisora gets up and tries again. Haye lands a fast accurate combination and Chisora gets knocked to the canvas again. He shows tremendous bravery to makes it up by the count, but the referee waves it off!  People start throwing their beer into the air and the pro-David Haye crowd are satisfied as Haye celebrates the win!
By Paul Serrant