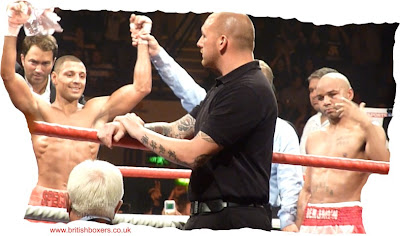 Fighting in his Hometown Arena, The Motorpoint in
Sheffield. Kell Brook got motoring as he barley made it past tough
American Carson Jones over 12 tough exciting rounds.

Questions were
asked before hand if Brook (10st 6 3/4 lbs) was world class?, could he
come through a crisis? and can his chin hold against a big puncher?. The
Sheffield man answered these questions and more, a suspected broken
nose left Brook’s face a bloody mess as Jones (10st 6 1/2 lbs) came on
very strong in the last 6 rounds to push Brook all the way. Jones was
certainly not here just to make up the numbers.

The fight started well for the Champion, very well in fact as he
jabbed, moved and landed at will on his opponent. In the first round
the general conscientious was that Jones was having a look at Brook as
he was following him around the ring but basically doing nothing OR so
we thought. The Pressure was building as Jones was making Brook move
around the ring at a pace Brook was not used to. The 2nd, 3rd and 4th
went the same way with Brook boxing beautifully and Jones chasing. On
occasion a Brook punch would stop Jones in his tracks then the Sheffield
man would go on the attack looking for a KO. It never came for Brook
but the fight was about to get very very difficult.
After 6 rounds Brook was well ahead, I had him 5-1 up, still
boxing, moving and landing it looked as if Brook was going to cruise to a
wide points win. Jones had other ideas. The pressure that the American
put on Brook was beginning to tell, the cutting of the ring and the body
shots made the champion slow down to a point where Jones could batter
away at him on the ropes. The 7th, 8th and 9th rounds were bad ones for
Brook, bleeding badly from that nose injury it had looked that Brook was
beginning to wilt. In his post fight interview Brook had mentioned he
wasn’t happy with aspects of his training but also his diet although he
did give full credit to the determined challenger Jones. The fight had
turned full circle, gone was the fluid movement by the champion. He was
now reduced to slugging it out on the ropes against a guy that had went 8
straight knockouts victories before this fight.
As the scorecards got tighter (i had it 5-4 Brook after 9) Brook
somehow got his second wind and started moving again. Don’t get me
wrong he was in full retreat mode but he was doing enough with his jab
to keep the now tiring Jones away. Brook like he had done earlier in the
fight turned southpaw in an attempt to keep Jones at distance. I had
Brook nicking 10 and 11, all he had to do now was see the final bell.
The last round started where the tenth and the eleventh left off
with Brook somehow moving out of harms way whilst flicking that pesky
jab at Jones, it didn’t last though as after a minute Jones began
pounding the body them moving to head. Brook was hurt and was hanging on
for life. Jones went for the kill, numerous more punch forced Brook
back to the ropes, the crowd were going absolutely crazy willing their
home fighter to the bell. Attack after attack rained in from Jones but
Brook answered one of those questions, in fact a few questions as in
those last 30 seconds of the fight that remained Brook came through his
crisis, his chin was tested and he had beaten a genuine world class
fighter.
Brook is now in line for an IBF title shot although its unclear
whether he will need to fight in another final eliminator. In this post
fight interview Jones said he felt he won and would like a rematch.
Somehow i cant see that happening soon, it was that tough a fight where
both fighter emerged with huge credit after a stormy build up to the
fight.
Below is my fightscorecollector’s scorecard along with all the press and fans scores for this IBF world title eliminator.