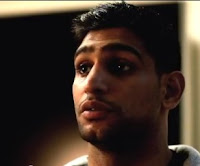 The reaction from Amir Khan, yesterday with regard to the IBF title being allowed to be kept by Lamont Peterson was not antagonising or hostile. Amir Khan said on twitter, “I‘m not bitter about what the IBF have done, it’s just unfair in sport. Getting caught taking drugs.  He can keep the title and W.”
In addition to that Khan is finding that the whole boxing system has contradicting judging, by his further tweets and it sounds like he was not feeling confident in the IBF as he went on to say, “Peterson was caught juiced up so the WBA reinstated the title back.  IBF I heard have Peterson still as the champ and no ban.  What’s the point of drugs tests”.

In a statement, the IBF said its decision to let Peterson keep the title, “Is based on the findings by an independent physician, who is certified in internal medicine and endocrinology, retained by the IBF to review Peterson’s medical records in relation to the information disclosed in the VADA report released this past May.”


Lamont Peterson is overwhelmed with the result of the IBF with regard to his IBF Title belt, which he won via a controversial split decision from Amir Khan on December 10.

Peterson said via this press statement, “I’m thankful, and I’m thrilled with the IBF’s decision,” when informed that the International Boxing Federation decided to allow Peterson to retain his Junior Welterweight title. Over the past few months, the Peterson camp has worked diligently to defend Lamont in the face of accusations and innuendo following the cancellation of a fight with Amir Khan.

Lamont added, “I want to thank my manager, Barry Hunter, for all of his support throughout this Ordeal. There were a lot of naysayers out there, but Barry and the rest of my team never doubted me. My team fought non-stop to ensure that I was cleared.”

Peterson is now expected to make a mandatory defence of his title against Zab Judah as soon as possible and Amir Khan will be fighting again in December, however the venue and opponent has not been announced yet.