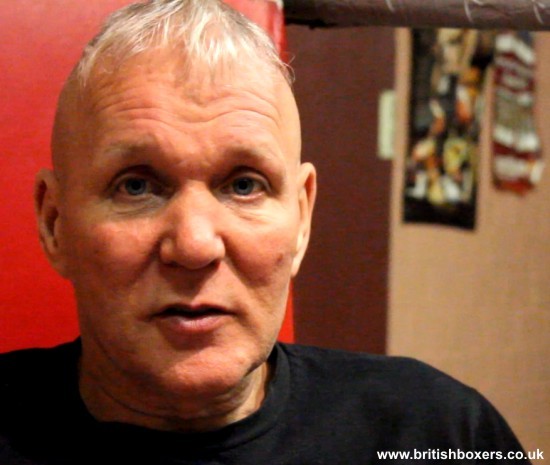 My own return to Bob Shannon’s Fighting Fit gym didn’t end with a fight, but it gave me a renewed insight into the Bob Shannon effect. Forget Ricky Hatton’s comeback, in 2005 this writer made his return to the gym after a 10-year gap in a bid to recapture past glories, right wrongs and, most importantly, obtain a six pack.

At one point, I sagged against the heavy bag, tapped it a few times and prayed for the end of the round, which was only a minute old.  My attempts at faking it ended when Shannon caught sight of me and bellowed: “Come on, son, nice and easy! Get it done!”  His exhortations gave me an extra two-minutes and saw me through the session.

Shannon’s infectious personality has inspired generations of so-called journalists, keep fitters, amateurs and professional boxers — one rallying cry from the veteran trainer can breathe live into tired limbs and lungs.  Therefore it was heartening when he was handed the job of training Ricky Hatton for his comeback.  Whether “The Hitman” wins, loses or draws at the Manchester Arena live on Primetime (on U.K. TV) and Showtime (in the U.S.) later tonight, Shannon will leave the venue knowing that he has given it all in a bid to get a British boxing legend’s career back on track.

For Shannon, it is both the end and start of a journey.  The end of his quiet quest for recognition and respect, and hopefully the start of a new title run for his new charge.  Either way, Shannon is sucking up every second and believes that Hatton made the right decision by returning to boxing to take on tough Ukrainian former world title-holder Vyacheslav Senchenko, 32-1 (21).

Sadly, Shannon’s cherished father and son, both named Robert, passed away at a young age and cannot partake in the big fight atmosphere.  Like Shannon, both men were boxing trainers; Robert Junior was the youngest licence holder in the U.K. when he earned his stripes, and Shannon’s feelings of pride over landing the Hatton job are fused with the sadness of not being able to share these moments with his own father and son.

“My dad have loved all this, he would be a legend if he was about now, people would appreciate his methods as he was ahead of his time decades ago,” said Shannon when speaking to BoxingScene on the eve of the fight.  “My dad could train all type of fighters, he had Billy Graham, who was a really smooth boxer, and loved working with Billy as well as the tough guys who would come forward.  I’m kicking that on and doing this for my family because my son was also a very promising corner man and trainer and I had hoped he would carry my family name forward when I retired.”

Senchenko spiced things up earlier this week by skipping the final press conference, much to Shannon’s disappointment, although he hopes that the 35-year-old’s lack of etiquette has further stoked the flames of Hatton’s own desire.

“Senchenko not turning up was the only bad thing,” he said.  “I’d have made him come out, but he didn’t and I don’t think Ricky’s the type of guy to say too much about it, which shows the type of person he is.  I couldn’t believe it, though.  Ricky is really excited.  He is in great shape, fighting shape and he’s got that look in his eyes again that he had in his prime years.  I know it is hard to get it all back, but Ricky’s put the graft in so you can’t ask for anymore than that.

“Don’t forget, this is a tough fight, Senchenko lost to [Paulie] Malignaggi, who is probably next for Ricky because he’s got the title and is made for Ricky, but this one is no easy fight because Ricky picked a guy who is very good.  Senchenko boxed in the 2000 Olympics; he made three defences of the WBA belt and has always campaigned at welterweight [where this fight takes place].  I’ve done everything I can for Ricky, I dedicate myself to the lads and making them better by working on hand-to-eye coordination and footwork, Ricky’s loved it all and has enjoyed it.”

Indeed, Shannon believes that Hatton, 34, has completely rededicated himself to the sport by going back to his boxing roots.  He said: “I know I talk about Billy a lot, but I told Ricky that he had his best days under Billy and I know myself from Billy’s time with my dad how much Billy loves boxing and talking boxing, so it was a case of getting Ricky back to where he feels comfortable and working on the things he worked on when he had those great days.  I think that’s why we’ve gelled.  We’re from the same place and understand the sport.

“I think [former coach Floyd] Mayweather [Senior] was a bit too flashy for Ricky, I don’t think Ricky was the right type of fighter for him, the old-school stuff we do at my gym is the best type of training for pressure fighters and some of the best fighters in the world, like Julio Cesar Chavez, did a similar type of training and he was one of the best fighters of the 1980s.  Of course boxing moves on and so do techniques, but people throw away old methods thinking they should go all high-tech —I try to mix the old with new because that’s always the best policy.”

He added: “My dad would have loved training Ricky, imagine if we could go back in time and have myself, Billy and Ricky all training under my dad, just think of the sparring we’d have had.  I learned a lot from my dad, he was capable of producing world-class fighters had he lived longer, so I’m taking it on from him to try to do that.

“It is destiny that me and Ricky are working together now.  It is not about money, we don’t discuss that — it is all about two men sharing their personal missions.  Ricky has said he has done some bad things to his body over the years and he wants to make up for that, I want to leave a legacy for my father and son, so we’re both driven men.  Plus Ricky is a very proud family man now, nothing prepares you for having your own family and how it makes you feel, so now Ricky’s looking at his own children and thinking he wants to do something for them.  By coming back, he’s showing his family and the world what Ricky Hatton’s all about — and that’s boxing, pure and simple.

“We get on because we want to do something with our lives before it gets too late and the partnership has grown out of that.  Ricky’s had a lot of success in his career, but he lost last time he fought [against Manny Pacquiao] and that can light a fire in your heart, which it has done with Ricky.”

This back-to-basics approach extended to the gym, Hatton has split his time between his own facility in Hyde and Shannon’s spit-and-sawdust gym in central Manchester.  He was especially impressed by the fact that Hatton, 45-2 (32), arrives carrying his own kit bag and happily works alongside aspiring pros and amateurs.

“Everyone knows that Ricky always had lots of fans who followed him around, some even made it into the gym, but for this fight he just turns up with his gym bag and works in private with the people training and myself, [Shannon’s assistant] Stacey [Sandbach] and [assistant trainer] Mike Jackson, and for me that was vital,” revealed Shannon.

“A training camp should be Spartan and behind closed doors so the fighters can forget that they’re big stars and remember the days when they were young lads hitting the bags and dreaming of success.  I’m just staying true to myself, enjoying working with Ricky and working towards a common goal with a fighter I’ve always admired and respected, what more can you ask for?  I’ve earned this, I’m not a young kid — I’m a middle-aged man who has served his time in the game.

“I’ll be in the corner on Saturday, running with the lads on Sunday, then back in the gym with Denton [Vassell] next week and decorating during the days all week long.  That’s my life, and I enjoy it.  I still do my graft in the day, work with the lads at night and get on with things — I’m a working-class lad with a real work ethic.  People think that us trainers are at home all day watching fights, but most of us have a day job and have to concentrate on that as well.

“It is going to be a great night, Senchenko is a good pro.  This fight will fire him up because he is facing Ricky Hatton here in Manchester.  Ricky has to be the old Ricky, slipping and giving angles so he doesn’t get caught coming in and out then letting his body shots go when he does slip and slide.  It will be exciting, it always is with Ricky, but I think he picked this lad to fire himself up and will impress his fans once again.”

As for Shannon, working with Hatton has brought a sense of pride and achievement, but now he wants more.  The trainer wants to see Hatton net a W, rediscover past form and forge ahead, should he opt to stay in the sport for a prolonged period.  Despite all the recent distractions, though, Shannon and his wife, Jean, know that the pangs of grief for their son will kick in as Christmas approaches.  However, they hope that a Hatton win will take the edge off their pain.

“It is here now,” said Shannon.  “The work’s over.  I’m enjoying it.  I can sleep at night knowing I’ve done everything I can to help Ricky.  You have to relax and enjoy these moments, but it is hard for myself and Jean at this time of year because naturally we miss our son, Robert.  It was a great, great loss that affects you at nighttime and all day, but I know he’d have been proud of us today.  I want to get a win, dedicate it to my boy and dad and pass it up to heaven for them as an early Christmas present.”

For those unable to get to the event and are planning on watching the fight at home then you can order the event on Primetime Sky channel 498 or via Virgin ‘On Demand.