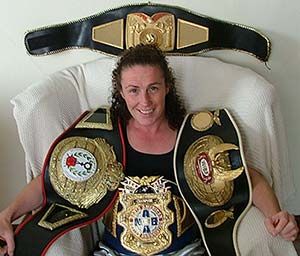 British Boxers In the Ring Q&A with Jane Couch

A professional fighter for 14 years, Jane Couch MBE (28-11-9kos) went in with the best women light-welterweight boxers of her generation, including Marischa Sjauw, Sharon Anyos, Leah Mellinger, Dora Webber, Anne Sophie Mathis and also the brilliant Lucia Rijker to name just a few.
Jane aka ‘The Fleetwood Assassin, credits boxing with keeping her out of big-time troubleafter being expelled from her Blackpool school as a teenager, she lived what she described as “a life of booze, drugs and street fighting” until she was 26. She saw a TV documentary about women’s boxing in America and decided that her future lay in the ring and in a life of boxing.
Jane from Fleetwood in Lancashire as had to overcome significant barriers in the game over the years, that prevented females from entering the boxing ring, and she as been a pioneer in getting women’s boxing recognised as a serious sport in the eyes of the games purists who saw it as wrong! In 1998 Jane made British boxing history by being involved in the first women’s professional boxing contest to be sanctioned under the jurisdiction of the British Boxing Board of Control since it’s formation in 1929, making her the ‘first recognised female British boxer.’
The five times world champion also worked tirelessly to help get women’s boxing included in the London 2012 Olympics. In 2007 to cap a remarkable career and rise from the streets to boxing prominence, Jane was awarded an M.B.E. from Prince Charles for her achievements both in and out of the ring. On receiving the M.B.E at Buckingham Palace, Jane said, “I’ve been all over the world boxing in some of the biggest shows in front of millions of people but this is the biggest shock ever.
“I was so nervous that I forgot that I was supposed to call him ‘Your Majesty’. Instead I just said hello mate ! ” admitted Jane afterwards. “But he was killing himself laughing and at one point told me I was a bit unusual ! I offered to shake his hand and suggested I had better go because he had others to talk to, but he said he could talk to me all day. As for my curtsy – well it is best forgotten !” she later added. Whatever injustice’s went on during Janes career and the reluctance of many to stop her being a boxer, and achieving her dreams, Jane never gave up and it is an absolute credit to her for never losing the desire to succeed and believing that there is no such word as ‘you can’t’
Boxing has now embraced Jane, has she had embraced it, she is highly respected within the fight games four walls and is a guide and mentor to her many young boxing hopefuls who she promotes and manages. Jane announced her retirement from fighting in December, 2008 but still is involved in the game with her boxing interview channel, she still loves the sport that did so much for her life. Jane Couch MBE will always be known as the flag bearer for British female boxing.

British Boxers caught up with Jane this week for our ‘In the Ring with’ Q&A series.

Jane how did you get into boxing?

I got into boxing after I saw a documentary about girls boxing in the USA saw the film and went straight to the local boxing club in Fleetwood and asked to train they eventually let me but they wasn’t to keen as girls didn’t box all them years ago In the end I had to leave and move to Bristol to carry on.

Best advice you were ever given?
Don’t believe anything anyone tells you in this game

Where did you train?
I trained at Spaniorum farm near Bristol

Who was your coach?
my coach was Tex Woodward

What was your amateur back ground and record?
didn’t do amateur as it was illegal for women to box in those days

How would you describe your fight style?

Definitely more of a fighter than a boxer

Who influenced you as a young boxer?

Who do you wish you had fought or want to fight?

I fought everyone never ducked any of the top girls

What would you have done if you wasn’t a boxer?

Hard to say i don’t know anything else But definitely something unusual.

There’s so many over the years but it’s probably when I boxed in Jamacia in Montego Bay and there was a power cut and Tex had to wrap my hands by candlelight and Lennox Lewis came into the dressing room while Tex was doing it and was holding the candle so he could see.

An Interesting Boxing Story?
I boxed in new Orleans years ago on a big show for ABC television when we arrived I me Angelo Dundee and his wife and we spent the week with them showing us around and making sure we were ok Angelo had a boxer on the same show so was there for that and they had brought the weigh in forward to 12pm instead of 4pm When it came to the weigh in I was about quarter of a pound over I was in the toilets and said to Angelo’s wife I’m over and they have brought the weigh in forward a few hours She took me outside shouted Angelo over told him He then took me to the scale got the commissioner and said can Jane get weighed first he said yes I got on the scales looked down it said 142lb Angelo shouted Jane Couch 140lb and pushed me off the scale the commissioner didn’t even look just wrote it down and wished me luck.

Craziest thing you’ve read about yourself?
Well I’ve read loads as there was a lot written and a lot jumped on the bandwagon slating me while I was trying to get boxing legalised for girls I read I was going to fight a man and then someone wrote me and Paul Ingle were going to fight They used to make things up all the time Instead of letting me get on with my sport I was fighting them all outside the ring trying to defend why I did boxing in the end I gave up and said you know what write what you want.

Do you have a day job?
I run janecouchboxing.com after retirement it’s always hard to re adjust did a bit of small hall promoting Thats hardest job in the old and as Steve Wood, Carl Greaves, Jon Peggwill tell you quickest way to lose Money So I would like to get involved in something but just not sure what.

Family life?
I live my partner Brian and I’m happy have no kids thank god lol and don’t want any My mum still lives in Fleetwood who I’m very close to.

What was your best asset as a fighter?
I think my best asset as a fighter was my fitness and I would fight anyone anywhere. I have travelled to America 48 hours before a fight in there own back yard I laugh now I must have been nuts but wouldn’t change it. Too many boxers these days aren’t active enough boxing only once or twice a year isn’t any good and worrying about losing your 0 isn’t the right way. Every great fighter has lost you just learn from it.

What was your Honey punch?
I used to like the uppercut inside

Best opponent you sparred with?
Wow to many to name, Glenn Catley, Dean Francis, Darren Dorrington, Crawford Ashley once had a move round with Matthew Saud Muhammad in USA that was unbelievable!

Best fight you have seen live or on TV?
Corrales v Castillo

If you could be ringside for one fight next year which one would it be?
Mayweather v Pacman

Best and worse thing about the boxing game?
The best thing is that most in boxing are great people and like family and such a laugh the worse thing is the politics and the back stabbing usually between promoters but others as well If everyone could work together would be better but tat will never happen.

How did you deal with your pre-fight nerves?

I just used to try and channel them, go for a walk around what ever casino or hall in America I was in. It was difficult though but as soon as the bell went it was no problem then and you wonder why you got so worked up.

Too many to name just one

What rule would you introduce/change in Boxing if you could?
Rules to change in boxing? This word subjective! It really winds me up. There was a lad in Prizefigher the other day that was clearly robbed blind and ex fighter the promoters of the how said it was subjective. The board should pull in these judges that are incapable of getting it right. Fine them and suspend them just like they do boxers and other licence holders! It Makes me sick how a boxer can get fined for not having two pairs of shorts Yet a judge can do that to a fighter and just go back to the hotel where the promoter has paid for him to stay and have a drink, While the fighters team is just left to pick up the pieces, then listen to the TV pundits say its subjective! They got no balls none of them they just protecting there jobs. Get rid of the bad refs and judges and the promoters should stick by the fighter that’s been robbed, not just say its subjective!

Most memorable Gym moment?
Glenn Catley hitting me with a left hook in sparring I was dizzy for a week, that lad could punch! Glenn is a great friend of mine top lad.

Would you be a boxer if you started your life over again?
Hell Yeah

Favourite British fighter Present?
It’s hard, we got Ricky the people’s champ, Carl Froch who has never had it easy and is a real throw back. So many good fighters out there so would find it hard to have a favourite.

Something your fans need to know about you?
I’m mental! (laughs)