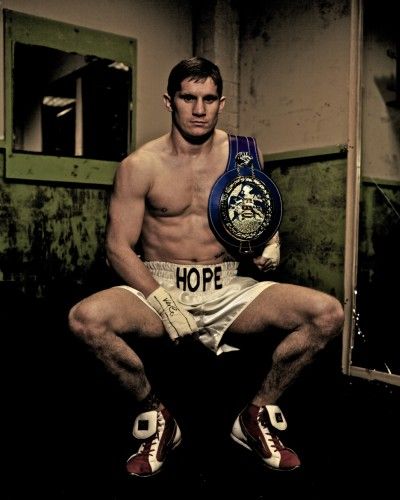 British Boxers In the Ring Q&A with Kerry Hope 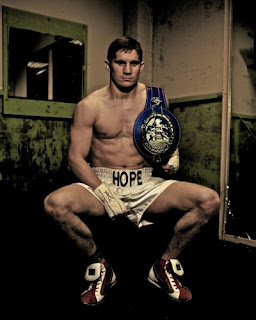 But before that big British encounter, the Merthyr man will have a warm up contest on the Froch v Mack Nottingham bill this weekend against Hungarian Norbert Szekeres.

In March this year against Grzegorz Proksa, Hope had his finest hour when he took the European belt from the Surrey based Pole via a 12 round points decision.

But four months later in a rematch with proska, Hope lost the title in the first defence getting stopped in round 8.

Avid trainer and ultimately dedicated professional Hope, now 31 years-old, is now back and looking to put the Proska loss behind him, as he gets chance to hit the big time with a win over Barker.
BritishBoxers.co.uk caught up with Kerry this week for our ‘In the Ring with’ Q&A Interview series to find out a few more facts about the honest and dedicated Mr Hope.
Kerry how did you get into boxing?
I was no good at football haha. I was just getting in trouble at school and was told to be taken to the gym by my uncle.
Who/what inspired you in the beginning?
Merthyr has a great boxing history in general and I’m proud of my roots, i understand it isn’t exactly the land of opportunity but I have a lot of family who were involved in the sport so I guess this could of been an inspiration. I started Karate at the age of 4 so I find sport more exciting competing as an individual.
Best advice you were ever given?
Give boxing your everything because its a short career. Fear no man and never give in.
Where do you train?
I’ve been about a bit, started in Merthyr, Newbridge, California, Bolton and now I’m back in the Valleys training in Llantrisant.
Who is your coach?
Gary Lockett
What was your amateur back ground and record?
70 Amateur fights, Welsh international
Who was your first coach?
Mark Virgin, he put the first pair of gloves on my hands and I owe everything I’ve ever achieved to him. Can’t thank him enough.
An Interesting Boxing Story?
I could tell a lot of interesting and true stories but ill save it.
Craziest thing you’ve read about yourself?
Paper usually make up a lot of things, remember one paper saying I said i was going to go to a fighters house and fight him in the garden if he didn’t fight me.
Do you have a day job?
Not at the moment, but I’m not frightened of the shovel
Other than boxing what are your hobbies and pastimes?
I’m always running, swimming as a past time but i’m welsh and i love to watch rugby especially the internationals. Spending time with my family is most important as boxing takes up a lot of it.

If you wasn’t a boxer, what would you like to be?

Love to be involved in sport I’m very sports orientated.
Whats your best asset?
Fitness/Determination
What/Who inspires you?
Wanting to be someone my kids can look up to inspires me. And also representing my country and my town
Whats your Honey punch?
Left foot!!
Best opponent you have sparred with?
Sparred with many world champions, got to say obviously Joe Calzaghe. But for a natural talent that I would love to add to my dedication Tony Docherty.
Best prospect you have seen?
So many coming through from amateurs, and too many to mention.
Your favourite Ring walk music?
Not bothered about ring entrance music, usually don’t hear it as I’m zoned out walking to the ring.
Best fight you have seen live or on TV?
Always debating on Gatti/Ward I or Barrerra/Morales I
If you could be ringside for one fight next year which one would it be?
Have to be any big Vegas fight as I’d love to go there and didn’t get the chance when I was based there.
If the phone rang this afternoon with a Big fight offer, who would the opponent be and where?
Australian world champion Daniel Geale in Sydney

Best and worse thing about the boxing game?
The dishonesty of some of the people, I’m a get what you see mannered person and I wish there were more like that. Although another can be I’ve met some really great friends in the sport that I will take through life with me.
How do you deal with your pre-fight nerves?
You just got to prepare to your best ability, then it keeps away some nerves for me. I know I am one of the hardest trainers in the sport.
Best friend in Boxing?
Got some great friends up north in Bolton.
What rule would you introduce/change in Boxing if you could?
Anything that stops corrupt decisions and makes boxing more fair. It only gives the sport a bad name to the viewing public.
Most memorable Gym moment?
Had some great gym experiences in America and training at the wild card. I remember sparring Alfredo Angulo there and everyone thought he was gonna blow me out, but it was far different
Toughest Part of training?
Being out of the house for so many hours and away from family things.
Toughest Opponent you have faced?
Danny Zee in America, they must of got him out on day release from a phsyciatric home
Other Sports?
Rugby
Favorite all time fighter?
Sugar Ray Leonard (pictured right)
Favourite British fighter Past?
Barry McGuigan
Favourite British fighter Present?
Carl Froch
Follow Kerry Hope on Twitter
@Khopebox