Darren Barker Interview: ‘I’m the best middleweight in the U.K’ 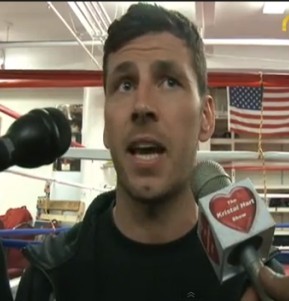 Darren how did you get into boxing:
“My dad got me into it. He was a very
modest man, who never showed off his trophies, but he made me want to be
a boxer.”

Who inspired you in the beginning:
“My dad again.”

Best advice you were ever given:
“If he hits you, hit him back twice! And, if he can’t hit you at all, he can’t beat you.”

Where do you train:
“Tony Sim’s gym in Essex.”

Who is your coach:
“Tony Sims.”

The funniest thing you’ve seen in boxing:
“There are two; the paraglide
thing in the Holyfield-Bowe fight, and the Cello Renda-Paul Samuels
double knockdown.”

Craziest thing you’ve read about yourself:
“An American writer once wrote so many negative, spiteful things about
me I couldn’t believe it. I’ll never regret not reading another one of
his articles.”

If you weren’t a boxer what would you be:
“If I was good enough, I’d love to play football for the mighty blues, Chelsea.”

Your best asset:
“My amateur pedigree, my grounding as a fighter.”

What inspires you:
“To become world champion.”

Your honey punch:
“My jab.”

Best fighter you’ve sparred:
“Mikkel Kessler. I did a week with him, we sparred every day. Also Carl Froch.”

If the phone rang this afternoon with a big fight offer, who would the opponent be:
“Daniel Geale, in London.”

Other sports:Toughest opponent you have faced:
“Next question! (laughs). Sergio Martinez.”

“I love football and I support Chelsea.”