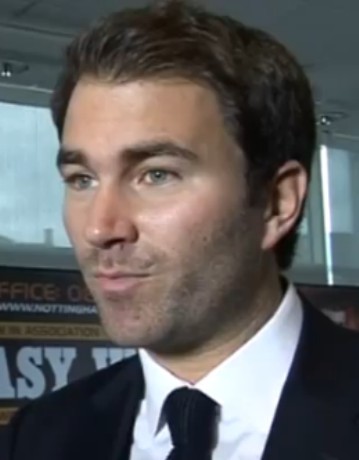 Matchroom’s Eddie Hearn is steeling himself for a bumper November and December schedule that will see most his stable’s main stars feature across two big bills.

Carl Froch headlines at Nottingham’s Capital FM Arena on November 17 when he defends his IBF super middleweight title against Yusaf Mack and Darren Barker makes his return on a December 8 bill at London’s Olympia venue — both shows will be broadcast live on Sky Sports here in the U.K.

Tony Bellew and Gavin Rees will also be in action on the two bills, against Roberto Feliciano Bolonti and John Murray respectively, and Hearn hopes to deliver world title shots for the two contenders during 2013.

Although former British and European lightweight titlist Murray will present Rees with a huge test come December 8, Hearn had hoped to secure “The Rock” a shot at the WBA lightweight belt, which he is the number two contender for, only for the WBA to place the vacant title on the line for the November 24 fight between current interim titlist Richard Abril and Sharif Bogere, the current #3 ranked contender.  Hearn, though, believes that the WBA should have made Abril-Rees a reality and is locked in talks with the governing body.
Murray, 31-2 (18), challenged for the WBA belt in December of last year — a grueling TKO loss to Brandon Rio, who was stripped of his title on the scales — and the Manchester marauder will hope to walk away from Hearn’s Christmas party with the 37-1-1 (18) titlist’s scalp and ranking in what could be the clash of the fight.
However, the Rees-Murray encounter will face stiff competition from Darren Barker’s meeting with Kerry Hope, which is Barker’s first outing since October of last year, when he lost to Sergio Martinez for the world middleweight title.  The 23-1 (14), Barnet-based boxer will have to be on form to stave off former EBU title-holder Hope, 17-4 (1).
“It is a great fight,” said Hearn when speaking to BoxingScene.  “Darren’s a big favourite, but Kerry’s as tough as nails even though he got stopped against Grzegorz Proksa in their rematch.  Darren’s motivated for this one because this is a domestic fight.  Darren had the head-to-head [last week] and said he was even more up for it after that.  It is very difficult when you’ve been out for fourteen-months, so it will be an interesting fight.  Also, Kerry sells tickets, he sold a couple of hundred last time, and Darren does loads of tickets, so it should be a really good atmosphere.
“We’ve also got [Lee] Purdy and [Carson] Jones, which will be a great.  Carson took that fight straight away.  Kell made Carson look more dangerous than he is.  If the Kell who turned up against Hector David Saldivia showed up for that fight he’d have stopped Carson, but this one should be a real war.  It is a trade fight, Purdy’s isn’t the biggest household name, but it is a great fight that most see as 60-40 for Carson.  For me, it is a 50-50 fight.”
Froch and Bellew are the leading lights of the Nottingham show.  Ticket sales have gone well and Hearn expects the Nottingham faithful to hammer out the venue to cheer on “The Cobra”.
“We’re through seven thousand tickets already [as of last week] for Nottingham and it will be a sellout, Mack’s a tough opponent,” he said.  “We’ve also got Tony Bellew fighting for the vacant WBC silver [light-heavyweight] title and we want to move forward with the WBC to try and get a final eliminator early next year for Tony and then get a title fight in the summer.”
Bellew, 18-1 (12), is an engaging character and, crucially, he knows that how to play the media game, the Livepudlian can be engaging, serious, playful and menacing, which helps sell tickets and help build the groundwork for boxing’s Holy Grail, wider crossover appeal.
“You and I know Tony, he’s different to how some people perceive him — he’s just a lovely bloke who is passionate about his boxing,” stated Hearn.  “This fight will appeal to him because it is against a decent opponent in a packed out arena.  It is a chance for him to go out and make a statement.”
Froch, though, is the star of the show.  The 29-2 (21) boxer looked sensational when beating Bute in May.  Indeed, Hearn believes that the Froch of the Bute fight would hand Andre Ward, who widely out-pointed Froch last year, his first professional loss, which is a big claim.
“You should see him in training, where he’s breaking records and looks fantastic, so we’ve got this fight then Bute in March followed by a big one in the summer,” he said.  “We hope to get [Mikkel] Kessler or even try to get Ward over for a rematch.  Ward beat Carl, but it wasn’t the real Carl Froch in there that night.  We want Ward to go in against the Froch who beat Bute.  We’ll make the offer to Andre and he might see it as something that is interesting.”
Please send news and views to neckodeemus@hotmail.co.uk or Twitter @Terryboxing.  courtesy of Rick Reeno www.boxingscene.com