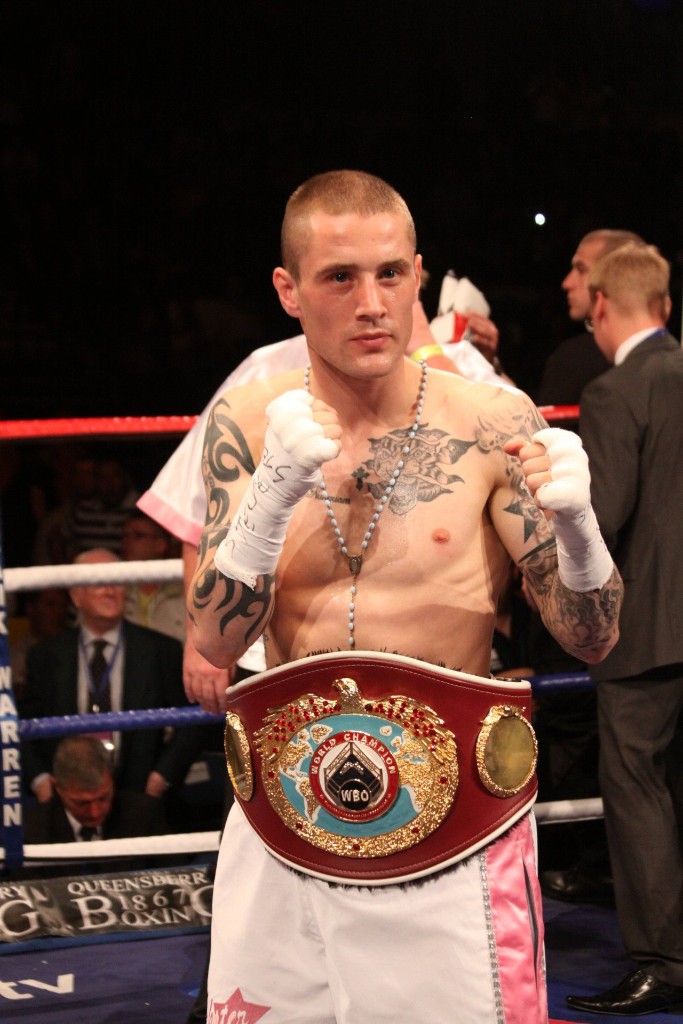 WBO lightweight champion Ricky Burns will face current IBF lightweight champion Miguel Vazquez in a big title unification fight on March 16 at Wembley Arena in a Frank Warren show called ‘Rule Britannia’
The night will also feature Nathan Cleverly who defends his WBO light heavyweight title against German based mandatory challenger Robin Krasniqi. – Georges Groves takes on Italian, Mouhamed Ali Ndiaye for the European title and Dereck Chisora is also expected to return.
Burns, 29, was forced to cancel his December title defence after his original opponent Liam Walsh (who also fights on this bill) pulled out and then his replacement Jose Ocampo withdrew days before the fight following the death of his trainer. various other replacements were on standby including Derry Mathews but a late deal couldn’t be done.
Coatsbridge fighter Burns 35-2, 10 KOs, will now take on the 26-year-old Mexican Vazquez, who has a record of 33-3, with 13 of his wins coming by knock-out, he is a seasoned veteran who has been in with some of the best boxers around and once campaigned at light-welterweight.
Hailing from Guadalajara, Vazquez was last in action in December on the
Manny Pacquiao-Juan Manuel Marquez undercard when he defeated Mercito Gesta
on points to retain his belt. He made his professional debut in 2006 losing a split decision to Saul ‘Canelo’ Alvarez, who is the current WBC light-middleweight champion and one of the best fighters P4P; there have been easier debuts!

He re–matched the Red Haired Mexican hero in 2008 again losing on points over ten rounds in a non title fight. Vasquez’s only other defeat was a points loss to reigning WBO welterweight champion Timothy Bradley in 2007. He claimed the vacant IBF title in August 2010 by outpointing Ji-Hoon Kim and has defended the belt 5 times

So which ever way you look at this match-up; it’s got ‘Proper Fight’ written all over it and one that Burns deserves at this stage of his career. But it wont be easy and Vasquez will test the world championship credentials of Burns, in what on paper is the Scotsman’s toughest fight to date.
Burns who’s record now reads 35-2, with 10 KOs; has become a real world class fighter of quality and substance and is on the verge of becoming one of the best boxers we have produced, if he can overcome the toughened Vasquez and unify the lightweight titles. When Burns suffered his first defeat in his 14th fight against Alex Arthur for the British, European and Commonwealth super featherweight titles in 2006; and then Carl Johanneson in 2007 again for the British belt, it would have took a brave gambler to put any money on him reaching the lofty heights he reigns at now.
But even in them early career defeats Burns didn’t disgrace himself and pushed two much more experienced fighters at the time all the way, losing on points both times, but learning valuable lessons at a young age that have matured into pugilistic knowledge you cant buy.
Since that last loss to Johanneson, Burns has remained unbeaten for five years, storming his way to the WBO super-featherweight title when he outscored the dangerous world champion Roman Martinez in 2010 in an unforgettable night at the Kelvin Hall in Glasgow.
Burns defended the title three times before stepping up to lightweight to fight banger Michael Katsidis for the WBO lightweight title in 2011. Burns outboxed the Australian and became a two weight world champion. He has since defended that belt twice; fist Paulus Moses and then that fantastic performance in stopping British rival Kevin Mitchell in September last year.

At today’s press conference to announce the bumper bill, Burns’ said it was his dream to unify the title’s and he’s excited to finally get this opportunity.

“This is a dream come true for me.  Any boxer would be happy winning two world titles at two weights and retire, but for me I want to continue winning more world titles, unifying them and stepping up the weight divisions.  said Burns “Vazquez is a top fighter and one that I’ve been after a long time so I’m over the moon that it’s happening.” he added

This is Big time boxing for Burns and the Hugh fights he had craved are upon him and the smart money will now be on our boy to add the IBF lightweight title to his collection on March 16.
Information on the other fights will follow in the run up to the event.
@britishboxers