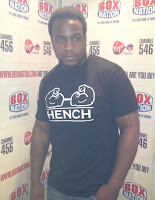 How did you get into boxing?

I got into boxing through Mr. Decruze, my primary school head teacher! I was always fighting in school, so he suggested to my mum that she bring me to a boxing club.

Do you have any boxing idols in particular who have inspired you?

In boxing, I’m inspired by Floyd Mayweather JR, while I am also a big fan of Evander Holyfield and James Toney. I think skill-wise they’re the best ever.

Having been ranked as high as #4 in the world as an amateur, it’s probably fair to say that the initial stage of your professional career didn’t anywhere close to reflecting your ability. What would you say is the main reason for this?
The reasons for my skills not being recognised in the pros as of yet have been my inactivity and not being fully fit when I have fought.

How did you feel after the setback against Colin Kenna?

The loss to Kenna made me realise that I could not keep going into fights unfit. I know I should have beaten him. He never beat me, I beat myself. Fail to prepare, prepare to fail, etc.

Fortunately, you then became a part of the Goodwin stable. Just how much of a relief was it to finally have a good team around you?

Having a good team around you is just as important as preparing well. Goodwin is a good guy and truthful. He says what he does and does what he says.

In terms of performances levels, many would agree that you’ve looked much better in your last two fights, especially against Dorian Darch. Surely things must be coming together nicely under the tutelage of Don Charles?

Don is a world–class trainer. We are still getting used to each other, so there’s plenty more to come and what he has done speaks for itself. He took Dereck Chisora to a world title fight and worked with Yasin El Maachi. As was evident against Darch, I showed a different performance to any other pro fight I have had.

At what sort of level do you feel you can be competing at 12-18 months from now?

In 12 to 18 months from now, I see myself at world level and fighting for the world title.

There are plenty of heavyweight prospects hogging all of the attention at the moment. Are you enjoying being able to ply your trade under the radar with low expectations for as long as it lasts, or are you looking forward to people talking about Ian Lewison again?

I prefer no one knowing of me at the moment. Going into fights, people don’t know what to expect from me, being that I’m under the radar. When the time comes, I know that people will be calling my name again. Until then, I’ll enjoy being unknown.

There have been a few exchanges between yourself and Richard Towers recently. Do you ever see the two of you crossing paths?

Richard Towers is a bum and he should be exposed as being one. I want to show the world how crap he is, I would even fight him after a training session. He can’t box and is scared to get hit. If he doesn’t want to get hit, he should take up darts!

Andrew “Freddie” Flintoff did of course make his debut as a professional boxer recently. Do you applaud someone from another sport getting into the ring and having a go, or does it merely make a mockery of boxing?

Andrew Flintoff could beat Towers. Respect to him for trying boxing, only time can tell how far he goes. Who would have thought an actor would become Governor of California.

Any boxing-related regrets, whether as an amateur, as a pro, or somewhere in-between?

No regrets, I only look forward.

Any message for fans and critics alike?

Fans and critics. If you like me, thank you for your support. If you don’t, thanks anyway!

Although currently known more for his status on the amateur scene and having endured a stuttering start to his career as a professional, Ian Lewison has enjoyed a new aura of purpose since signing with the Goodwins. Time will tell if he can deliver as a professional, although the window of opportunity is certainly there. In his next outing, Lewison will be participating in Betfair Prizefighter International Heavyweights III at York Hall, Bethnal Green on February 23rd. With the likes of Travis Walker, Audley Harrison, and Martin Rogan confirmed as fellow participants, Lewison will have no shortage of illustrious names to potentially add to his record.