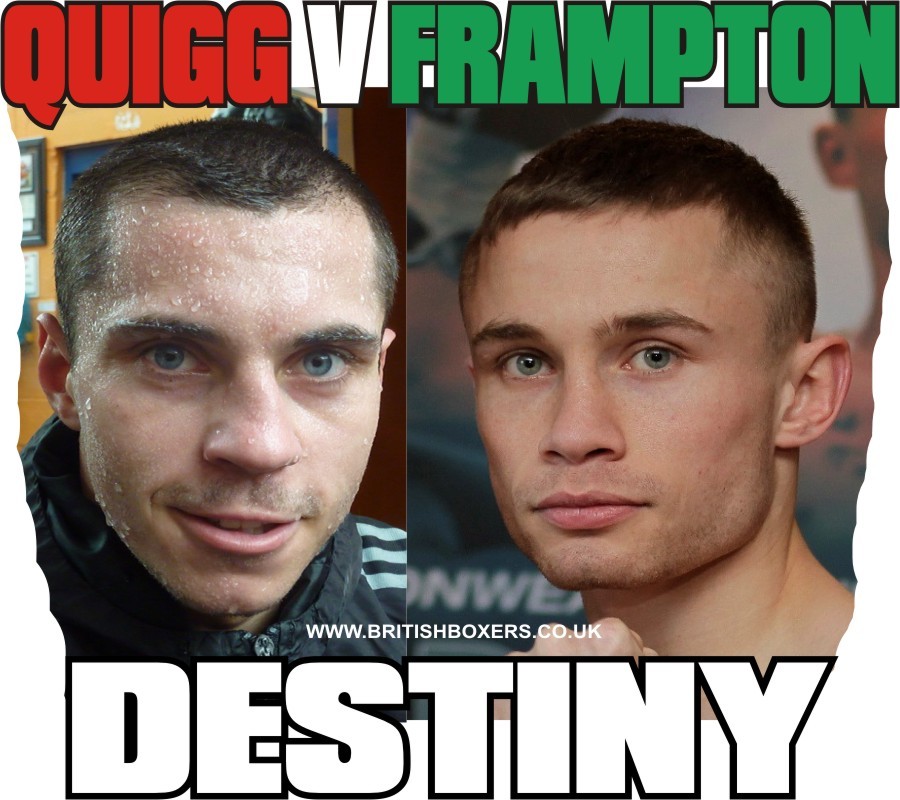 Carl Frampton-Scott Quigg – A British Mega-Fight That Has To Happen!

Forget David Price-Tyson Fury (Fury clearly wants nothing to do with the man who defeated him as an amateur) and Amir Khan-Kell Brook; the best all-British showdown that can be made right now is Carl Frampton-Scott Quigg.
This would be super-bantamweight sizzler has all the ingredients to be an absolute blockbuster, and it would prove even more appealing in light of “The Jackal’s” hugely impressive win over Kiko Martinez last night (in an early FOTY candidate).

Quigg, coming off his November stoppage of the tough and seasoned Rendall Munroe, is also reaching his peak right about now. Both guys are convinced they are headed to the very top and with the skills the unbeaten pair have shown, not too many fans doubt them. But who is the superior fighter?

Frampton, 16-0(11) has faced a higher quality of opposition in my opinion – his stoppage wins over Steve Molitor and Martinez topping anything Quigg has yet achieved – but Quigg, the younger man by a year at age 24, seems ready for just about anyone short of the Guillermo Rigoneauxs or Nonito Donaires of the world. And though Frampton has talked about potential fights with these two world rulers, he too needs further experience before taking that ultimate step. A fight between Frampton and Quigg would, for the winner, tick all the boxes.
In an ideal world, these two red-hot stars in the making would indeed rumble this summer, with the winner getting oh, so close to that big shot at world honours. Style wise, Quigg Vs. Frampton could not fail to thrill, and both guys, though they have stopped short of trash talking, have a healthy desire to prove something by defeating the other. Frampton showed last night that he has a chin, and that he can fight whilst going backwards. Quigg, 25-0(18) showed power against an admittedly past his best Munroe and while he has been knocked down in his career (Jamie Arthur had Scott down in the 4th-round back in their Feb. 2012 battle), he too looks to have some iron in his jaw. A risky fight to be sure, the winner of this one would be even bigger, while the loser would be able to come again.
Right now, if I had to pick a winner, I’d lean towards Frampton; a man who really does look to have the stuff needed to be a future great – but Quigg  is perfectly capable of proving me wrong. Already, in the bars and on the streets, British fans are debating the outcome of this would be, could be classic. Let’s hope this 50-50-looking match-up actually comes off and doesn’t go the way of so many never to be delivered showdowns.
Make it happen, Matchroom and Hatton Promotions!