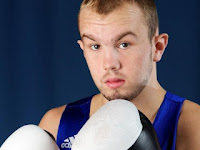 15th February 2012
By Dan Waters
Former Great Britain boxer Iain Weaver is facing fighting abroad, or a legal battle, in order to finally get his professional career started. The Dorset prospect, 23, has lost his battle with the BBBofC to gain a license to box after Neurosurgeons found a cyst on his brain.
Weaver, who had 115 fights as an amateur, says he has since been cleared by two specialists and has been given the all clear by the Boxing Union of Ireland’s head neurosurgeon. However, Robert Smith, the BBBofC general secretary says that Weaver ‘will not be granted a license until we feel he is fit to fight’ and his appeal was denied on February 13th on medical ground.
The delay in Weaver being granted a license has also put his promotional deal with Eddie Hearn’s Matchroom Boxing in jeopardy. In July, after Weaver announced that he would be hanging up his amateur vest, he was signed to the stable but the uncertainty over whether he will be permitted to fight in a British ring looks to have ended in an agreement to terminate the deal.
After receiving the news today, Weaver took to his Twitter account to express his bemusement at the decision, saying he is ‘confused about why the board won’t grant me a license. 3 specialist give me the all clear and I get the same answer…wat (sic) is up with them? This newest setback comes less than twelve months after Weaver was controversially omitted from the final qualifying tournament for Rob McCracken’s Team GB squad, and only two years after his featherweight silver medal at the 2010 European Championships in Moscow.
Potential Matchroom stable mate Carl Froch said of Weaver ‘Iain is a cracking fighter that belongs in the pro game. He is a really talented young guy and a real tough nut. His style is much more suited to the professional scene and, a bit like me, he loves a tear up.’
Weaver has often expressed his preference to stay in Britain in the hope of fighting for British titles, but with this latest blow to his fledgling career, he may be forced to embark on a career on the continent.