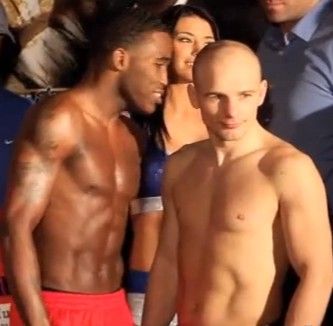 ‘They hope I Beat and shut him Up!’ Gavin Rees on Adrien Broner fight

A great combination of Welsh mannerisms, a WBC lightweight title and a few different fighting styles will be in the line up tonight between Adrien Broner and Gavin Rees. With the playground open for all night action on HBO in Atlantic City there is a great card prepared including Demetrius Hopkins taking on Charles Whittaker for the WBC super middle weight eliminator and Vicente Escobedo fighting a ten rounder in the junior middleweights against Edner Cherry.

In New York this week Broner was using centre stage to his advantage and said, “If we stood face to face, I probably couldn’t see him, but I respect him as a fighter, we don’t watch tape; I’ve never seen him fight before.” Therefore losing his feather weight title on the scales and stopping Escobedo in the 5th was merely something that was in the course of how his approach is. He simply does not give any thought of what anyone will think or what anyone will say, his attitude is the same way as his boxing he will fight the way he wants and the way he does.

Gavin Rees said, “His attitude stinks man, he shows fighters no respect, but he hasn’t even earned the right to do that, I’ve been in the states for five weeks now and the American boxing fans don’t like him, they tell me that they hope I beat him up and shut him up, I think he acts like a fool for no reason and no one really likes that.”

Rees wants to silence Broner and the American media have been taking a great interest to find out who Rees is and what he is about, this has been a good angle for Rees, as far as Team Broner are concerned he is another UK fighter that is trying to take make something dramatic with this opportunity in the states.

Rees also discussed issues with regard to weight, he told US media, “It’s not the right way to do things, it’s not healthy, but in the past I’ve had to lose half a stone in a day to make weight.”

So Adrien “The Problem” Broner (25-0,21Kos) who is undefeated makes his very first defence of his lightweight title on Saturday 16th February against Britain’s hard hitting Gavin Rees (37-1-1, 18Kos) , his ultimate challenge will be the fight with the scales at the weigh in.

Many may feel that we may need to give Broner tips on how to fight an aggressive fighter such as Rees with strengths including a stiff left jab and hook off the jab and ferocious right hand. Broner has his own unique style including the famous shoulder roll defence just like Floyd Mayweather uses, however he has not defended his world title yet and with all the intensity of the promotion and media coverage it may put a mask on what he can really achieve.

Fight will be aired on HBO Boxing in Atlantic City in New Jersey on Saturday 16th February 2am GMT and 10pm PT, other fights include Saiko Bika v Nikola Sjekloca for the WBC super middleweight eliminator, Demetrius Hopkins v Charles Whittaker for the junior middleweights fight and Vicente Escobedo v Edner Cherry 10 rounds for a junior lightweight title, will also include 4 rounder’s from Jamel Herring, Wahid Rahim and Richard Hernandez.