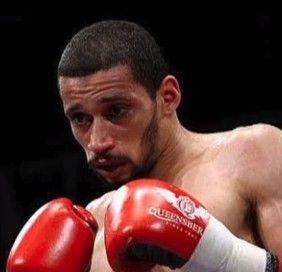 Former English light welterweight champion Curtis Woodhouse talks to Kugan Cassius and ifilmlondon.com about losing his title to Shayne Singleton last Friday. After the controversial points defeat to Singleton, Woodhouse contemplated retirement such was his anger at the result.

Two days after the loss Curtis was again being pestered by one of them horrible internet troll things, people who just go out of their way to spread hate and negativity from behind the comfort of their computer screens.

The culprit was a Twitter user called @jimmyob88 who had been abusing Curtis on the social networking website for the last six months, with some sickening garbage, not deserved for a boxer, a good guy and someone who wears their heart on their sleeve the way the Sheffield man does.
Curtis decided to take action after finally snapping and travelling 70 miles to confront the man who had once told the boxer, he hopes he dies in the ring to join his dead dad!
Curtis did his research, found out the persons name, address and even what Sunday league football team the troll played for and then set off. Curtis turned up in the trolls street took a picture of the street sign and that is when the troll backed down and slid into his lair where he hasn’t been heard of since!
Good on you Curtis! – Follow the man himself here @woodhousecurtis
Shayne Singleton claimed a controversial split decision to take Curtis Woodhouse’s English light welterweight title at Bowlers in Manchester on Friday night after an entertaining encounter that saw both boys give it their all for 10 tough rounds. read more….