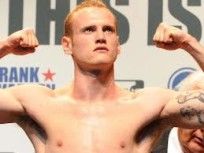 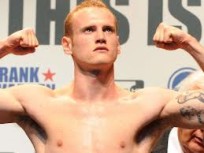 George Groves got his career with Matchroom Sport off to a winning start with a purposeful 3rd round blowout over Argentinian Dario Balmaceda at Wembley on Saturday night.
The London super-middleweight signed for his new promoter Eddie Hearn last Monday after leaving Frank Warren after his contract came to an end. Groves no sooner had signed and officially been revealed, when he was thrust straight into action a few days later quickly extended his unbeaten record to 17 fights.
Groves, 24, had Balmaceda down after landing a crushing body shot in the second round before finishing his man with a big right that ended the action at 2:10 of the third. Balmaceda spat his gumshield out and remained on one knee for the count, giving Groves the win.
“I’ve had to put distractions to one side, come out and be on form,” Groves said.
Promoter Eddie Hearn was keen to push Groves forward as well, adding: “He’s ready for a big fight now.”
Groves’  next step is to fight on the Froch-Kessler undercard, which takes place on May 25. Groves will be looking to make a big statement on that night and could start the countdown to a potential all British meeting against Froch at the end of the year.  “Carl’s a great fighter, we sparred together over the years but we’re rivals now,” Groves told Sky Sports News.
“There’s a possibility a fight could happen sooner rather than later. It would be awesome if I could win my own title and we could have a unification clash.
“I don’t think I’ll be sparring with Carl now as we’re rivals. I want Carl to beat Kessler. As a Brit I want him to win, and as a friend.”