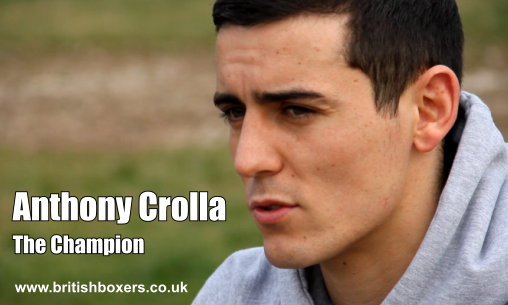 Ricky Hatton believes Anthony Crolla will be back on the road to the top if he can gain revenge on Derry Mathews next weekend.

Crolla, 26, goes into the lion’s den to face Mathews on a Matchroom Sport show at the Echo Arena in Liverpool.
Victory will earn him the vacant Commonwealth lightweight crown, but more importantly it will dispel any lingering demons from their first meeting.
Last April, Mathews relieved Crolla (pic above) of the British crown in a back and forth war which Boxing News later voted as domestic fight of the year.
Hatton, Crolla’s promoter, expects a different outcome this time around and feels a win for the affable Mancunian will also provide the catalyst for bigger and better things.
“If Anthony can avenge the loss to Derry his confidence will go sky high and he can go from strength to strength,” Ricky said.
“If he gets the Commonwealth title, he can move on to British and upwards from there to European and beyond.
“Not so long ago there was lots of talk about Anthony boxing Ricky Burns for his world title and at that time many people were favouring Anthony.
“Anthony’s got massive potential and if he beats Derry Mathews there’s no reason why the world title dream can’t be still alive for him.”
‘The Hitman’ also expects Crolla to be a little smarter than in last year’s meeting.
Early on Crolla looked every bit his ‘Million Dollar’ tag as he bombed forwards and laid siege on Mathews, but this tactic meant he neglected his defence and walked onto several hard uppercuts before being halted in the sixth round.
“I always remember Anthony as a nice silky boxer and he turned into something of a brawler last year,” Ricky recalled.
“Anthony can switch stances and when you do that there’s every chance you’ll get caught square on and Derry capitalised on that last time.
“This time I expect him to be a bit more defence minded. If he goes back to the old Anthony Crolla then I think he’ll be too good for Derry.”