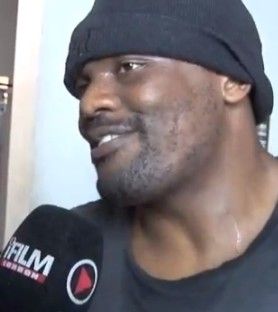 Dereck Chisora talks to ifilmLondon about his comeback fight this weekend against Argentinian Hector Alfredo on the Frank Warren promoted show  ’RuleBritannia’ at Wembley Arena on Saturday night, on the undercard of Nathan Cleverly’s WBO light-heavyweight title defence against Robin Krasniq.

The former British heavyweight champion also gives his views on fellow British heavyweights on comebacks David Price and David Haye; plus Tyson Fury, who on Saturday night takes on Steve Cunningham at Madison Square Gardens in New York and Chisora offered his support to his former opponent and wish him the best of luck in what is the biggest fight of his career against American former cruiserweight world champion Cunningham.

“You know theirs a rivalry between me Tyson Fury, David Price, David Haye and other heavyweights coming up.” Chisora told James Helder.

“But if I see one of my fellow Brits boxing outside of the pond, I have to support.

“I support Tyson Fury because he’s out in America trying to dominate the States and I wish him all the best and I want him to do well. The more he progresses, the better a future fight with him and me will be and the whole world will be watching.

“So I say to Tyson Fury and his whole camp, Goodluck.!”