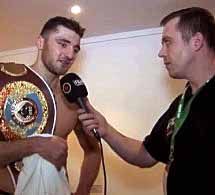 Nathan Cleverly speaks about his win over Robin Krasniqi in defence of his WBO light-heavyweight title, a fight he produced a master class in to retain his belt and set up bigger fights at the very top of his division. iFilm London’s James Helder was at Wembley Arena on a busy Saturday night of boxing to grab post fight interviews with the winners. full fight card review

“I feel quite happy with the performance, it is important at this level I don’t get reckless like I sometimes do and so I boxed my way through it and I’m happy with that, I shown another side to my game onwards and upwards now, I’m ready for unification fights.” – Nathan Cleverly

Exciting British super-flyweight champion Paul Butler stopped Nigerian Yaqub Kareem to claim the Commonwealth belt with an dominant 5th round stoppage. Butler was always a hot prospect and this once quality amateur is getting better and better each fight as a pro. Butler, 24, is a proud wearer of the Lonsdale belt and plans on holding onto it, making the required three defences to win the belt for keeps. But says his future ultimately lies at world level and a shot at the world title while he is still young enough to win it.

Liam Walsh talks about his fantastic victory over Scott Harrison

Cromer’s Liam Walsh pulled off the biggest win of his career outpointing former world champion Scott Harrison in a real tear up that was fight of the night on the Wembley Arena card. Walsh retained his WBO European lightweight belt with a gutsy performance against a tough uncompromising Harrison who pushed him all the way.

Former British heavyweight champion Dereck Chisora is back and probably could have done without someone as tricky and negative as Alfredo Avila.

Frank Buglioni on his 3rd round KO over Darren McKenna

London prospect Frank Buglioni scored a 3rd round stoppage over Darren McKenna in the 3rd round after a high paced battle while it lasted.

Joe Murray talks about his points win over Dai Davis, shaking off the cobwebs after 14 months out of the ring

Miles Shinkwin on his points win over Mitch Mitchell