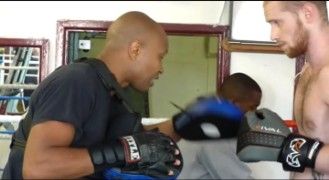 Undefeated Manchester prospect Jimmy ‘Kilrain’ Kelly has his 7th outing on May 10, and his first chance to claim a belt when he takes on former British title challenger Max Maxwell for the vacant British Masters light-middleweight title at his home town Civic Forum in Wythenshawe.

For Kelly, 20, who turned professional in March last year, after a trophy laden amateur career, it signals his first step up in class, against a seasoned pro, who has been in with an host of British names and is a sparring partner for Amir Khan. Maxwell from Birmingham is a durable opponent, and a good test for any rookie pro, and will serve as a good yard stick, to how far Kelly has come in just over a year.

It’s a step up for me, but Ensley offered me the fight and I snapped his hand off.” Kelly told BritishBoxers.

“He had that good win over Brian Rose and fought for the British title, recently he fought Erick Ochieng for the English title, and lately has been in with some other unbeaten prospects in the division. So it’s a good fight for me and is a measure to see where I am compared to everyone else in the country.”

Trained by former British light-middleweight champion Ensley Bingham at the famous Champ’s Camp Gym in Moss side, there are high hopes for ‘Kilrain’ and I can add to them by telling you that; if this young man isnt challenging for bigger domestic honours in the next year or so I’d be very surprised.

There is no shortage of confidence in Kelly and his camp, and they know that he can make a statement if he can overcome the Midlander with ease. But they are not taking anything for granted and are aware that, when given time to prepare and when a title is up for grabs, Maxwell can raise his game and they are expecting the very best of him on May 10.

“If Jimmy messes up and doesn’t do the right thing’s Max Maxwell will give him a good lesson.” said coach Ensley Bingham.

“But I wouldn’t put him in a fight I wasn’t confident of him winning. Obviously I think Jimmy’s an exceptional fighter and he’s going places so these are the kind of kids he’s got to go up against and deal with.

“But he has got that maturity now, he’s got a good boxing brain and is able to box to instructions, so this is a step in the right direction.”

In his last fight at The Forum, Jimmy took less than a round to stop Simone Lucas with a devastating left hook, not too dissimilar to the one coach Bingham used to flatten his foe’s with and it seems that the ‘Bingo’ magic is rubbing off on his student. “I was over the moon because we expected it to go the distance but towards the end of the first round I threw a left hook, caught him clean and it was all over. I was really pleased and, looking at his record beforehand, didn’t expect it.” added Kelly.

“The support for me is growing in the area now, before it was just family and friends buying tickets, but now I’ve got other people asking me for tickets and hopefully I can put on another good performance again at the Forum. Im excited to be back there, last time it was a full house and I cant wait for the fight now.”

Watch the rest of our interview with Jimmy Kelly and Ensley Bingham on the above video.