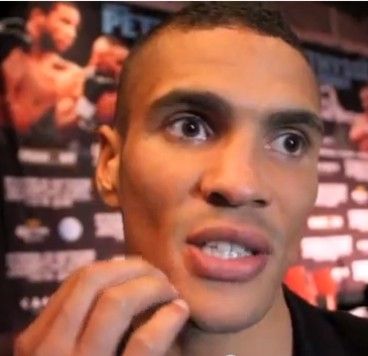 The likable Ogogo, 24, (1-0, 1KO) arrived in America on Friday last week and has been training at Gleason’s gym and the Trinity Boxing Club in New York and has been doing his runs around Central Park to prepare for his fight with Perez (5-4, 3KO)

“Not many people can come to New York obviously all paid for, and train and box at the end of the week, so I’m really enjoying my self training hard and living the dream.” Ogogo said.

Ogogo has signed a pro contract with the Los Angeles-based Golden Boy Promotions after a successful amateur career that saw Ogogo’s win honours including a European silver medal (2012), Commonwealth Games silver medal (2010) and Junior Olympics gold medal (2004) and then topped that off by beating Ukraine’s world number one Ievgen Khytrov in a thrilling bout on his way to the bronze medal at the London 2012 Olympic games.

Watch the rest of the interview with Anthony Ogogo on the video above.

Anthony Ogogo is a terrific talent and a boxer who will be a big name in the sport in the next few years no doubt! – BritishBoxers

Harron Khan, (1-0) the 22-year-old younger brother of Amir, is another Brit who also fights on the US bill when he takes on California’s Vicente Medellin (0-5) in a four-round bantamweight contest. Khan was a good amateur and although different in style to his older sibling, this young man from Bolton has got plenty of ability, and is a promising prospect in his own right.

Khan got pro career off to a good start last month (April 27) when he outpointed the tough Brett Fidoe in Sheffield.