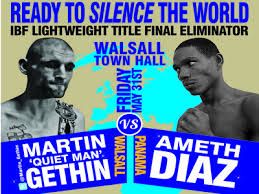 Martin Gethin says his Walsall crowd will push him to victory

Martin Gethin is just one step away from a potential IBF world Title as he prepares for his final eliminator fight against Ameth Diaz at Walsall Town Hall on Friday 31st May 2013.

UKO Boxing’s, Jon Sidaway, caught up with Gethin to see how he’s gearing up as he looks to silence the world in front of his home town and the LIVE TV cameras.

Gethin takes on his Panamanian opponent at Walsall Town Hall in an IBF Lightweight Title Final Eliminator, meaning he is just one step away from a world title shot. The show, ‘Ready To Silence The World’ is promoted by Frank Warren in associated with NEWOB Promotions.

Till is convinced Gethin, the current British Lightweight Champion and IBF International Titleholder, has what it takes to win and, after 52 professional fights during an 11 year career, he is as qualified as anybody to make that call.

“He’s got a great chance,” Till told www.uko-boxing.com. “If I was a bit younger I’d have helped him with his sparring!

“He’s determined and brave and has a lot of heart. I think he’ll beat Diaz. We’re all backing him anyway. It’s great that a fighter from Walsall is flying the Walsall flag.”

Till, who is 50 this year, boxed all over Britain and held the Midlands Area Lightweight Title. He regularly sparred legendary world champion Barry McGuigan and is highly regarded in the boxing community.

Fighting out of the same town and at the same weight as Gethin, Till is delighted that the man 3o years his junior has picked up the mantle and now overtaken him as the most successful fighter to come out of Walsall.

“He’s doing really well,” added Till.“It’s unbelievable what he’s achieved really. He did what I failed to do; win the British Lightweight Title.

“For me that Lonsdale Belt is the best in the world. I hope he goes out there and takes it all in and gets his chance for a world title shot. I wish him the best of luck. “

Gethin and Diaz weigh-in this coming Thursday, 30th May at Walsall Town Hall at 1.00pm. The event is open to the general public.

Gethin versus Diaz will be televised live and exclusive on BoxNation (Sky Ch. 437/Virgin Ch. 546). Join at www.boxnation.com