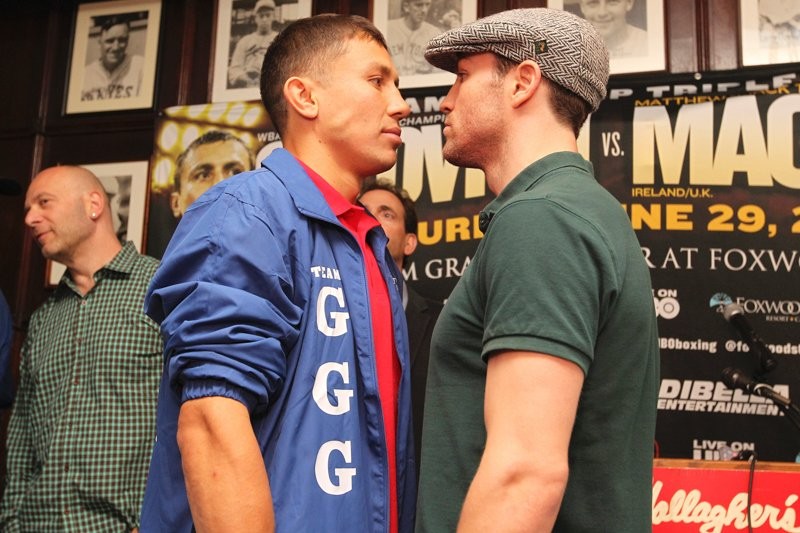 Matthew “Mack The Knife” Macklin (29-4, 20KO’s) challenges Gennady “GGG” Golovkin (26-0, 23KO’s) for his WBA/IBO middleweight titles in the much-anticipated showdown at the MGM Grand Theater at Foxwoods ® Resort Casino in Mashantucket, Connecticut this Saturday night. The champion Golovkin and the challenger Macklin held their final press conference earlier this afternoon before a standing room only crowd at New York City’s famed Gallagher’s Steakhouse. Both fighters looked eager to get things underway after lengthy training camps and promised fireworks on Saturday night. Below are photos and quotes from the final presser:

It is very good to see everybody, and I want to thank everyone who was involved in making this fight. We are very close right now to the fight night and I am very excited. I think this is a great fight for us. I am the champion, and Matthew is the best challenger out there for me. This fight will prove who is truly the best in the middleweight division.

This is my third time fighting for a world title and I feel that I am a better fighter now than in either of those appearances. The biggest fights and the toughest challenges have always brought the best out of me, and I know that is what will happen on Saturday night. No disrespect, but he has never fought anyone of my caliber. The amateurs are the amateurs, this is the professionals. He was winning amateur championships when I was having 12-round wars. There is an old saying, ‘When the going gets tough the tough gets going’, and I know we have a tough task on Saturday night, but I know that on Saturday night I WILL be walking out of that ring as the new middleweight champion of the world.

Everyone involved with this promotion has been all class and shown nothing but professionalism. HBO wanted to put together the best possible fight for Gennady, and we feel that Matthew is that matchup. Usually I am not known for being brass at press conferences, I will say though, and this is with all due respect, but we think that Gennady is THE best middleweight in the world right now. To make everyone else a believer though, we know that Gennady has to prove that, and we feel that is exactly what he will do on Saturday night.

This is going to be a terrific fight and a terrific event on Saturday night. Golovkin has already been ordained as the 2nd coming and we and Team Macklin think that he needs to prove that, and on Saturday night he is going to have to walk through fire to do that. Nobody wanted to fight this guy (GGG), partly because HBO and the press have already ordained him and have him out to be this beast of a human being. There is no doubting he had a great amateur career and his knockout ratio now is amazing. The difference in this fight though is that Matt Macklin is not scared of you. Matt Macklin is a big, strong, aggressive middleweight. This is going to be the hardest fight of your career Gennady. I do give credit to Gennady though because he is a great champion. The whole world has run away from this guy, except for Matthew Macklin, and for that I salute you.

I think Matthew’s biggest asset is having Buddy, who is such a great trainer in his corner. We are excited about this fight because we know Matthew is going to be right there in front of us. We are expecting a tough fight on Saturday, but also a short fight. It is going to be very exciting for as long as it lasts.

It is amazing when you get a fighter that wants to fight everyone, and that’s what we have in Macklin. He never takes easy fights. I think this is a great fight for Boxing, because it features the best fighting the best. People ask me what is the game plan? When you fight a guy that punches like this guy, you just have to keep is basic – keep your hands up, chin down and keep your ass off the ground. This fight is going to come down to nuts and guts and whoever has more of those on fight night will come out victorious.

We are really looking forward to this event on Saturday night. We expect an electric atmosphere. I think Macklin’s army is probably already there at Foxwoods gearing up for event. This fight features two of the best middleweights in the world. This truly is the type of a dream match-up for us at HBO. Neither of these guys know how to fight going backwards and that is going to make for fireworks on Saturday night. They come to fight and they come to deliver for the fans and we at HBO are proud to be a part of it.

Whether GG is superman or man of steal, we aren’t so sure, but what we are sure of is Matthew Macklin will take him places he has never been in his career. He will be hit more and harder than he has ever been hit and he better be ready for a war come Saturday night.