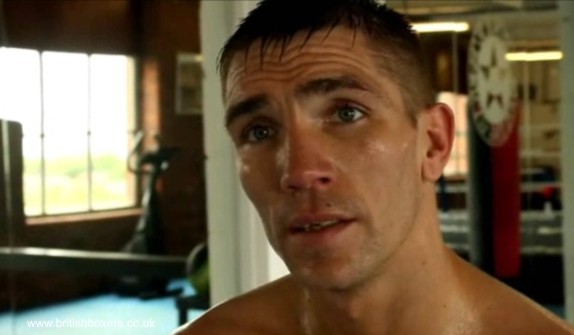 Mark Thompson: ‘Don’t Count Me Out, I’m Hungrier Than Ever’

Light-middleweight contender Mark Thompson is back in training and ready to make a fresh assault on the British domestic scene, with a mended hand and with a new lease of life for the sport. His next fight is set for July 20, at the De Vere Whites, Reebok Stadium, Bolton, against Birmingham’s Max Maxwell.

“Max Maxwell is an ideal opponent, he’s tough, comes for a scrap, no one stops him, so I’ll go out there do what I do and hopefully get the stoppage, then get out there after that and get titles.” Thompson told BritishBoxers.

Thompson, 32, first made a name for himself when stepping in at late notice to take on Vincent Vuma for the WBC International light-middleweight title in 2007, in what was his 12th fight. Vuma, was due to fight Jamie Moore, until a viral infection put paid to the Salford fighter’s preparations and Thompson took the gamble.

Although lacking in experience, fighting above his weight class at the time and not having had a full training camp, Thompson floored Vuma with a trade mark left hook to the body and pushed the experience South African, before losing in the eighth, but he had shown something in him that night and explains why he is still punching to this day.

Thompson went 12 fights unbeaten after that loss to Vuma, and in January 2010, the Heywood fighter had just won a British title eliminator against Kevin McIntyre and was flying, ready to take his chance on the domestic scene and challenge for a Lonsdale belt, but personal problems out of the ring saw him absent from boxing for two years.

He returned in July 2012 with a win over Martin Welsh, before getting the last minute call to face German ‘Golden Boy’ Jack Culcay in Germany, for the WBA Inter-Continental light middleweight title. Thompson had just joined coach Anthony Farnell, when new promoter Steve Wood offered him the Culcay fight, but with only three and half weeks to prepare.

Thompson performed well that night in Germany in September 2012, and took the fight to Culcay, he was winning the contest and winning over the away crowd with his performance. But he was tagged in the 5th and Culcay jumped on him and threw a barrage of punches that prompted the referee to jump in and controversially stopped the fight. Thompson though looked to have his senses about him and was defending the shots coming his way and catching most on the gloves and arms. It is still a fight that mivers Thompson and he would like to get a rematch with Culcay to set the record straight.

After that setback to Culcay, Thompson then dropped a 3-round decision in the Prizefighter welterweight semi-final to Dale Evans in January this year. Going into the Prizefighter he had injured his right hand in sparring against gym mate Matthew Hall, in the run up to the tournament.

The hand then went in the first fight on the night in the quarter final, but Thompson managed to get through it. He shouldn’t really have gone into the semi final against Evans, as he could only use one hand. He did though, and made it to the end of the fight, narrowly losing on points. He did earn an extra £4000 of much needed prize money for fighting the semi, but has been out of the ring since.

Since his ring comeback, Thompson  (25-3, 15 KO’s) has been training with Anthony Farnell and has a different mindset and focus to boxing and where he sees his career going from here. Now a father of three children, he believes he is ready to put his setbacks behind him and fulfill the potential he promised, when turning professional in September 2005.

Having had only 19 amateur fights before turning over pro and not having had too many hard fights in his career, Thompson feels he isn’t battle worn and that his best years are ahead. “I only had 19 amateur fight, I’ve only had 28 pro fights, and out of that 28, I had them couple of years out.

“I’m still young at it and I’m only just learning my trade now and I’m stepping up there again. Get me someone who’s going to come and fight, with a title on the line and you will see how good I am.

“Don’t count me out because of that lay off, I’m hungrier now than I ever was, I’m training harder and I’m in better shape.

“I’ll get this fight out of the way on the 20th (July) and then I’m looking for titles, Commonwealth, British (titles) I’ll take whatever comes up, I’ll even go back over to Germany (for Culcay rematch)  I’ve told Steve Wood (promoter) that, lets just take what comes up, lets have it!”

To Watch our Full Video Interview with Mark Thompson, including training and fight footage, please Continue to the Next Page.