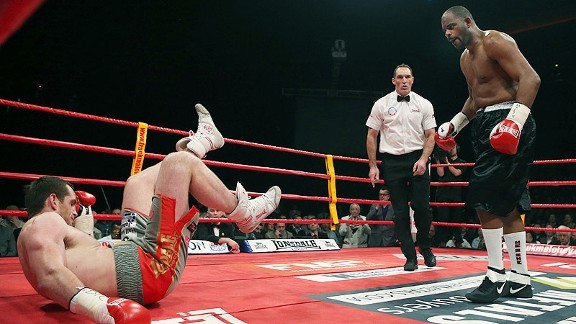 Price says one day he’ll be glad Thompson beat him

Heavyweight David Price believes one day he will be grateful that Tony Thompson beat him. The Washington DC southpaw famously stopped Price in two rounds in February, but the 6ft 8in scouser goes for revenge at Liverpool’s Echo Arena on Saturday July 6.

Price, 29, said: “There will be heavyweights who saw me get beat and thought ‘Thank God’ because they wouldn’t have to fight me in the next one or two fights.

“A year down the line when I have won two or three fights I will be able to say I’m glad that happened then.

“I can’t say that now because I am yet to avenge the defeat, but I do believe if I’d carried on the way I was going it was a formality I would lose.

“You get complacent and it is a lesson learnt. Once this fight is won I am right back in the mix and no one can deny that.

“It is about winning. I don’t care how I get it because I can move one.”

British and Commonwealth champion Price has won his first 15 fights with little fuss until running into Thompson’s right hand.

He added: “Because of the way I was going people expected me to batter Tony, but he only fought Wladimir Klitschko six months previously.

“The last thing a heavyweight losses is his punch and I got caught with a heavy shot. It didn’t look a heavy shot, but it was.

“He could try 2000 times again and it wouldn’t happen again but it is done.”

Two British championship contests take place on the same bill as the 12 rounder between Price (15-1) and Thomson (37-3).