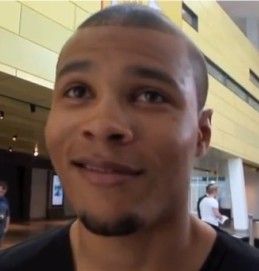 Brighton middleweight prospect Chris Eubank Jr has his first fight in 7 month’s on Saturday night, when he takes on Nottingham’s Tyan Booth at Glow, Bluewater in Kent on the undercard to  James DeGale’s WBC Silver super-middleweight title defence against Stjepan Bozic, which is being aired live on Channel 5 from 9.30pm.

Eubank Jr., 23, the son of former world champion and British boxing legend Chris Eubank, is unbeaten in 9 fights with 4 of his wins ending by KO.

Speaking to iFilmLondon today at the fight weigh-in, Eubank tells Kugan Cassius about his fight with Booth, which he has only had a week and half’s notice for. And when asked if a fight with current British champion Billy Joe Saunders is something that appeals to him, Eubank said: “We are looking to get a British title in the next six month’s or something like that, a fight with Saunders will happen, 100% I would beat him.”

“I rate him, (Saunders) British standard for sure, but the kid’s got nothing I cant deal with. I’ve seen him, decent hand speed, decent power, but I’d put him away in five or six rounds.” added Eubank.

Eubank also says he believes Martin Murray and Matthew Macklin are the two best middleweights in the country at the moment and says that a future meeting with James DeGale is also a fight he wants.

Continue to Page 2 to watch the full Video Interview with Chris Eubank Jr. By iFilmLondon