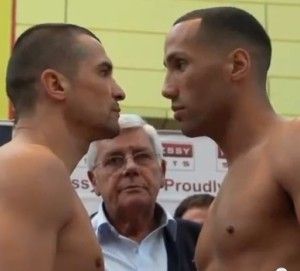 Chris Eubank Jr has his latest outing when he takes on Tyan Booth at Glow, Bluewater this Saturday on the undercard to the WBC Silver super-middleweight title fight between James DeGale MBE and Stjepan Bozic live on Channel 5 from 9.30pm.

“I’ve been in the gym, I’ve been training 24/7 – you’ve got to be ready for when you get that call to say it’s fight time and I’m ready to get in there, June 8th and take out my opponent in devastating fashion,” Eubank Jr said.

“I thought I was hungry before, but after not fighting for that amount of time I’m dying to get back in the ring in front of millions on Channel 5 and show exactly what I’m made of.”

“I’m just progressing up the ladder, I’m trying to get to that stage where I can start fighting for titles so this will take me one step closer to the end goal, which is to become champion of the world in the middleweight division,”

More undercard weigh-ins will appear here has they come through