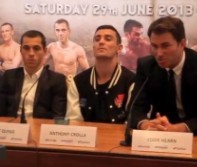 Today at the Midland Hotel in Manchester, Matchroom held the pre fight press conference to officially announce the big show that will feature the lightweight battle between former world champion Gavin Rees and Anthony Crolla the former British champion. The vacant British super-middleweight title is up for grabs on the night and old Liverpool adversaries Paul Smith and Tony Dodson go head-to-head for it in a rematch of their 2010 fight.

Former British champion and world ranked light-middleweight Brian Rose from Blackpool will also make an appearance, when he takes on Bulgarian Alexey Ribchev who defeated Manchester brawler Matthew Hall in 2011. This will be a tick over fight while Rose awaits his proposed world title fight. Matchroom had been working on ‘The Lion’ fighting current IBF middleweight champion Anthony Mundine, but the Australian champion has signed instead to fight ring legend Shane Mosley.

Also former GB Olympic Captain Tom Stalker has his 5th professional fight on the bill too. Full undercard line-up and pre fight reports on these contests will follow on this website.