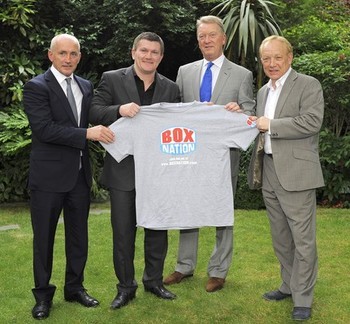 BoxNation yesterday made a massive announcement; They revealed at a press conference Bringing together some of the biggest names in British boxing. Negotiations with Bill Ives, Chairman of Rainham Steel, are apparently in the final stages and the Steel magnet is expected to become a major shareholder in the dedicated fight Channel.

After recent deals with Frank Maloney Promotions, Barry McGuigan’s Cyclone Promotions and Khan Promotions, BoxNation announced that Ricky Hatton, of Hatton Promotions, has reached a co-promotional deal with Frank Warren which will see his healthy stable of boxers will now appear exclusively on BoxNation, after SkySports refused to renew his contract with them. Part of the deal will see Hatton and his former promoter Frank Warren will put their pasf differences aside to co-promote events on a regular basis.

A massive coup for BoxNation, and their pier resistance on a positive day for boxing fans, was that they will screen live the fight billed as “The One”, and the biggest match-up that can possibly be made at the moment, Floyd Mayweather Jnr vs. Saul Alvarez on Saturday 14th September. What a fight that promises to be and the one that can cement Mayweather’s place has the No1 undisputed boxer of his generation.

BoxNation has been in existence for less than two years now, formed in September 2011, it has been a breath of fresh air for TV boxing fans, who were nearly forced to be monopolised by SkySports’ decision to just retain the services of one promoter’s stable of fighters and that was Eddie Hearn’s Matchroom Sports.

To compete with SkySports and to bring the best possible International and British fights to air, BoxNation have invested millions of pounds in the sport and continue to do so. There were the rumours on the fight circuit and internet, that the channel was on it’s arse after initially pumping in wads of cash and not getting the return on subscriber numbers. But the channel now seems to have ridden the storm and people are now starting to get it, this is not a fly by net outfit, this is a serious boxing organisation and for £10 a month a no brainer.

The big investment by Bill Ives, who was a former amateur boxer and is a massive fight fan, is another tick in the box and will surely grow the channel. BoxNation have said the investment will give the channel further stability, HD broadcast and financial resource to continue the growth and together with the new promoter deal have promised to deliver.

Recently Barry McGuigan took his unbeaten European super-featherweight champion Carl Frampton over to BoxNation. Prior to that Frank Maloney had signed a deal to showcase his stable of fighters headed by heavyweight contender David Price, on the channel, joining Frank Warren, who has now added Ricky Hatton in a joint deal.

“The last 18 months has been sensational for the channel and now with new agreements with the likes of Ricky Hatton and Barry McGuigan the future is only going to be even better.

“We have David Price in a couple of weeks, Chisora and Frampton on the Wembley Bill, Cleverly in Cardiff, Billy Joe Saunders v John Ryder at the Copper Box Arena and Amir Khan scheduled for the end of the year. Not to mention the fight the whole world wanted Mayweather vs Alvarez in September. We know what boxing fans want to see and we will continue to deliver for them.”

“Boxing has always been my passion. In my younger days I fought as an amateur boxer to a good level and I have continued to love and enjoy the sport throughout my life.

I am delighted to have the opportunity to be able to support BoxNation, the only dedicated boxing channel in the world today.”

“BoxNation has an unrivalled schedule of fights. We aim to bring our viewers the best of British boxing and we are delighted to be associated with so many of Britain’s top promoters and boxers. We also bring major international names such as Adrien Broner, Saul Alvarez, Sergio Martinez and Guillermo Rigondeaux to the UK fans, fights which would otherwise go unseen. This has made BoxNation truly the Channel of Champions. Today’s announcement that we are in talks with Bill Ives with a view to him becoming a significant shareholder in the company is most welcome. We intend to continue to build and strengthen our services.”

The channel has also provide a home for British promoters and provided them with a platform to develop future World Champions.

“I’m proud to be sitting here just shy of our 2 Year anniversary at BoxNation. A lot of naysayers didn’t think we could achieve this but with hard work and dedication from some like-minded people who saw our vision, we are here; bigger and better than ever. BoxNation is now unquestionably the home of British Boxing. It has Exclusive deals with a host of the World’s top Promoters and their fighters. It has invested millions of pounds into UK and International boxing and will continue to do so.

“I’m delighted to have reached a deal with Ricky Hatton, one that many thought they would never see. However, Ricky and I, along with the other Promoters and Managers sitting here today see the importance in working together to deliver big opportunities for our fighters and in doing so, delivering major fights for subscribers and fans alike.

“I look forward to welcoming Bill Ives to the Board, Bill has always been a huge supporter of the channel and I am thrilled that he wants to become a major shareholder in the company.”

“BoxNation is a fantastic channel and is the first dedicated to boxing and boxing fans, I can see the platform going from strength to strength and this is a proud day for Hatton Promotions.”

“Hatton Promotions has a fantastic stable of young fighters and BoxNation is the best partner to showcase their talent.

Together working alongside Frank Warren and the country’s leading boxing promotors we will be in a position to give boxing fans the fights they want to see. If you look at the combined talent signed to Hatton Promotions, Frank Warren and Frank Maloney that for me is the reason why BoxNation is the best boxing channel by far.”

Promoter Frank Maloney said: “A lot of sports fans would miss out on seeing British boxing talent if it wasn’t for BoxNation. The channel has stopped boxing being a minority sport on TV.”

“I’ve been involved in the sport of boxing since the early 1970s and the introduction of BoxNation, a dedicated boxing channel, which gives fans access to great fights all day, every day, is one of the best things that’s has happened to the sport.”

An action-packed summer of boxing starts on BoxNation this weekend (Friday 28th June) with a thrilling clash between unbeaten champions Frank Gavin, the British Welterweight king, and Denton Vassell, the Commonwealth title holder.