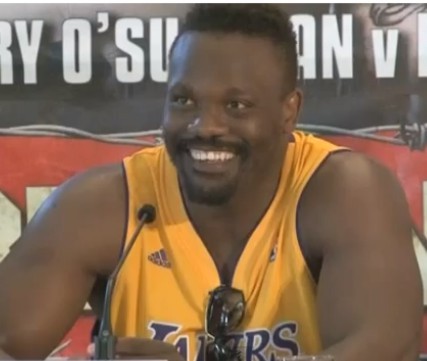 Dereck Chisora enters his 21st fight of his pro career against unbeaten Malik Scott at Wembley Arena on Saturday night. Having lost four of his last six contests, Chisora is at a pivotal moment of a controversial career.

Chisora, 29, has promised an exciting night and a great display when he faces the American. The Londoner has lost four of his last six fights and laboured to a stoppage win over Hector Alfredo Avila in April, but has promised, after going on a strict diet and dealing with other personal issues, that he is ready to comeback better than ever and like his opponent Scott, 32, has promised a night of fireworks in the Capital this weekend.

“”I’m in great shape and on Saturday there will be fireworks. I’m looking forward to this fight than any of my other fights previous. “My opponent is a very good boxer, but all I have to say to you guys is wait and see!”

“All I need is a ring where ever it is I go, the earth is my turf. I believe I’m the best skilled heavyweight on the planet, I believe Chisora is one of the toughest, especially for the such low experiences that he has, he is probably one of the toughest guys in the world too. It’s going to be a great fight, they’ll be fireworks, I’m not going to have to look for him, this is no dance contest, I’m not Fred Astaire, I’m not going to be running around no ring, I’m too big, I’m thirty two years old, I don’t have the same energy I had when I was twenty to be bouncing around and it’s going to be a great fight.”

Watch the fight Live on BoxNation