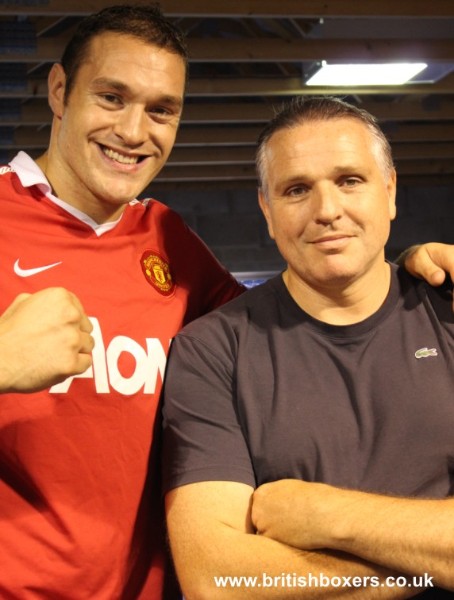 Peter Fury Warns Haye: ‘Your Not Dealing With A Weak Team Here’

Peter Fury uncle and trainer of Tyson Fury has warned David Haye to not mess him about regarding the contract talks about a fight between his nephew and the former heavyweight champion of the world and says that when a deal with him is shaken on then there is no going back and all hell will break loose if he does!

Fury is angry that Haye hasn’t been honorable, after six weeks of negotiations, Haye according to Fury, agreed to share a 50/50 split in purse money, which could possibly net both boxers £5 million plus, but has since moved the goalposts. With lots of rumours of proposed dates and press coverage, Fury gives it from his point of view and says that if a fight isn’t agreed and signed today (Monday) then there will be no fight atall.

“It is a fight we wanted, it would have been good for the British boxing public, it’s a 50/50 fight on paper anyway, although it’s not what we believe, but people see that and we respect it and that’s the other reason we want the fight, to show the British public who is No1, that’s what Tyson wanted to do” Fury told BaylorIC TV.

“They are trying to stall Tyson’s progress, but I can assure you all hell will break loose, because your not dealing with a weak team here, your not dealing with a team who are not street wise, we know all the games and the snidey things that can be done, but I sincerely hope that isn’t the case, I hope it is just their stalling tactic and a simple case of greed, them wanting more of the pie. Five or Six million isn’t enough maybe he wants seven and a half?

“This fight was suppose to be happening and at the twelfth hour they pulled out. They changed the deal on 50/50 and now they want more.

“Negotiations had been going perfect, absolutely no problems whatsoever and now this!

“So we don’t know the ulterior motive and whats behind this? But soon it will all come clear as time reveals everything.

“If it is like this then it isn’t going to happen, 50/50 was agreed and once you have agreed something with me you cant go back and change it, once you’ve agreed it. The way it looks to me at the minute is that he is trying to pull excuses so he can pull out of the fight.

“If he wants to be a snide that’s what he can do, but we are honorable people and I wouldn’t do that. There is no way I’m going to shake your hand, were going to do a deal, then get six weeks into it, put hundreds of man hours into it and then be hard faced and change your mind, come on!” added Fury.