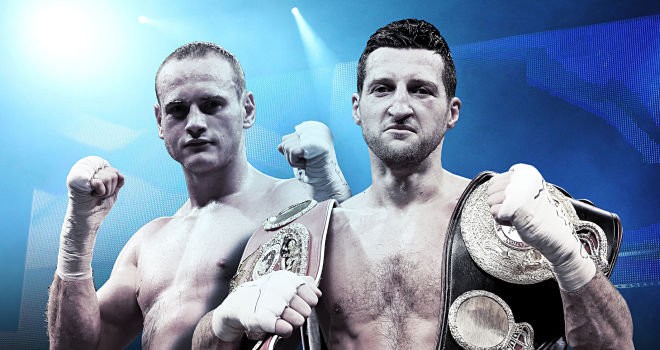 The super-middleweights will face off at the Phones 4u Arena, (former MEN) in what promises to be a hugh occasion promoted by Matchroom boxing and with the potential to be one of the fights of 2013.

The Manchester Arena in the heart of the city is now having something of a boxing revival, David Haye and Tyson Fury are also fighting there next month. It was Ricky Hatton who was the arena’s boxing flag bearer for many years, and the place has hosted some of the biggest names in the fight game going back decades.

Nottingham’s Froch, 36, will be putting his WBA and IBF world titles on the line against the unbeaten former British champion Groves, 25, after the Londoner was made mandatory challenger for his titles. Both boxers are with Matchroom Sport stable which made the fight easier to make. The showdown was announced last month, but today a date was confirmed by Eddie Hearn, head of Matchroom Boxing when he said;  “I’m delighted to bring this event to Manchester on November 23.

“This ‘Battle of Britain’ is a fascinating fight between a true legend of British boxing in Carl Froch and a superb young talent in George Groves; it’s going to be some atmosphere, some occasion.

“Phone lines, Twitter and emails haven’t stopped for tickets since we confirmed the fight.” added Hearn.

The fight promoter is expecting another sell-out and says tickets will go on sale on September 17.

In his last fight in May, Froch beat Mikkel Kessler to add the WBA title to his IBF belt and to date he has won 31 of his 33 fights – 22 by knockout.

Groves, 25, was on the undercard of that fight and knocked out Uruguay’s Noe Gonzalez Alcoba to secure this fight with to Froch, who is regarded has the No1 pound for pound boxer in the UK.

“I’m excited the first defence of both my belts is a big domestic clash,” said Froch.

Groves is unbeaten in 19 fights and his wins include 15 knockouts. He recently narked Froch when he opted to spar with with Dane Kessler before his fight against ‘The Cobra’ who was unhappy his fellow Briton was helping a foreign opponent to try and dethrone him, it didn’t work, but in November Groves gets the chance to do it himself.

“This is the biggest fight of my career and being a world champion is something that I dreamed of as a kid,” said Groves.

“I’m well ranked across all the governing bodies but fighting Carl is the one that I wanted the most. He is a big name in the UK and a well-respected champion around the world.

“I have a great team around me that can put together the right game plan to beat him and become a world champion and a major force in the super-middleweight division.”