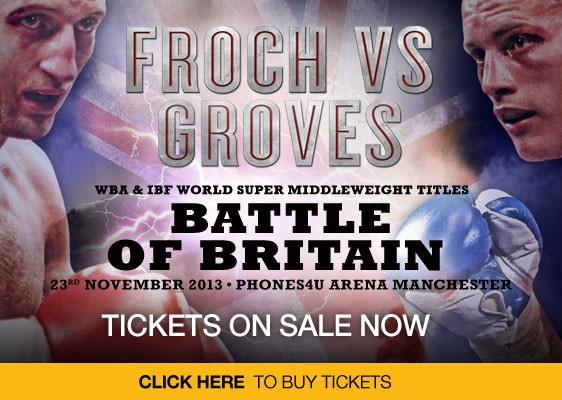 Froch vs Groves The Odds on The Battle of Britain

Carl Froch vs George Groves – ‘Battle of Britain’ Showdown was the hottest ticket in town and apparently sold out in just 11 minutes after going on sale.

Unlike some sports which have close season periods with little sporting or betting action – other than pre-season futures bets – the boxing calendar continues more or less throughout the year. One of the next major fights coming up in the boxing world is the Super Middleweight clash between IBF Champion Carl Froch and his British counterpart George Groves.

This fight is one which is generating considerable interest both amongst those who love just to watch the fights and those who love to watch and also indulge in sports betting on the outcome. The bookies have made Froch the clear favourite for this one – with odds of 8/11 in some places – but is he really such an obvious bet?

Groves certainly has some elements in his favour going into this fight, particularly his youth and hunger, as he is ten years the junior of Froch, and he also possesses quick hands, which the bookmakers believe could help ‘The Saint’ catch Froch with some dangerous punches. He also has a great record of 19-0, with 15 KO’s, with bookies leading to place him at 7/1 for a TKO. However Froch has far more experience, and will likely have faced faster punching fighters during his career than Groves such as Andre Ward, suggesting he should be able to cope. It should also be noted that the Cobra’s defence was at its strongest in his last bout against Mikkel Kessler– and Groves does not possess the quality of Kessler in the ring.

But Froch against Groves will prove that Britain is still a dominant force in the Boxing world.