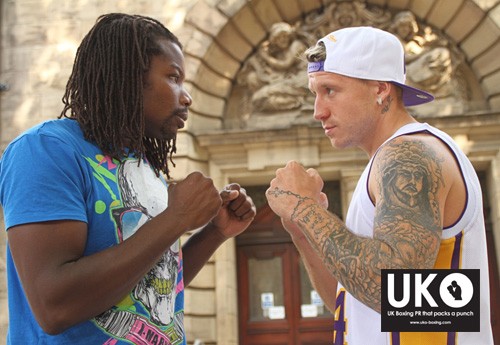 The Jamaican-born fighter has decided this new boxing season will be his last as he prepares to bring the curtain down on a solid professional boxing career that has seen him compete at the highest level of the domestic game.

The 34 year-old admits that, although he still has love for the sport, in the twilight of his career, he is treating boxing as his business. His priority now is to maximise his earning potential.

“Boxing is my livelihood at the moment so I treat it like a business,” he told www.uko-boxing.com. “I’m one of the few guys out there, and there are only a few, who can fight top lads on a week’s notice. That’s my niche.

“I’ve been in with top kids – my last fight was Ronnie Heffron for example – and I know what to expect. They don’t bring anything that I haven’t seen before.

“I’m in good shape and can fight at short notice so, while I can, that’s what I’m looking to do. This will be my last season and my aim is to be busy.”

Business is business. However, Saturday’s fight is a little different. It has an added incentive.

There’s a title up for grabs and Maxwell, who has held the Midlands Area strap and fought both the English and British Titles at Light Middleweight, is keen to add a bit of silverware to his trophy cabinet. The British Masters Light Middleweight strap is a belt the Birmingham-based fighter is keen to get his hands on.

“When you put a title up, there’s an added incentive,” he added. “Everyone wants to win things, whatever the belt. Jason is a decent fighter. He’s tough. No disrespect though, I don’t think he’s going to bring anything to the table that I haven’t seen before. I’ll be ready for him.”

Welborn and Maxwell are one of nine intriguing bouts taking place on Errol Johnson’s ‘Boys From The Black Country: The Aftermath’ show.

Walsall’s, Chris Keane, steps in with Remigijus Ziausys for a second time. The Midlands Area Cruiserweight Champion defeated the experienced Lithuanian last March, thanks to a convincing points win.

Tipton featherweight, Lee Glover, takes on Pavels Senkovs for a second time. The ‘Tipton Slasher’ defeated the Latvian on points back in 2010 and will be expecting a similar result when he steps back into the ring for the first time following a near two-year absence.