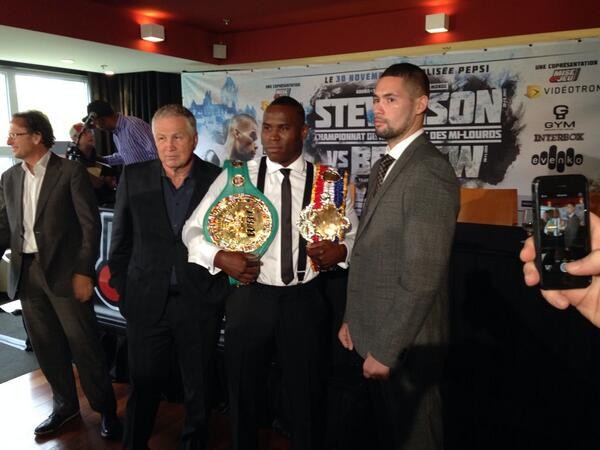 Bellew took to Twitter this week to confirm the news when he said:

“I’ve worked too hard for too long to not leave here with them belts in November 30th!” @TonyBellew #MyTimeIsComing

The 30-year-old from Liverpool has only tasted defeat once in his career, when he narrowly lost out on a points to Nathan Cleverly in October 2011 in his first world title challenge. Since then Bellew has recorded four wins and a draw, picking up a victory in the rematch with Isaac Chilemba in May.

Stevenson, 36, successfully defended his WBC crown against Tavoris Cloud last month when his opponent retired in the seventh round. Stevenson won the WBC belt in June.

He won his world heavyweight title with a dramatic first-round knockout in just 76 seconds against “Bad” Chad Dawson who was considered at that time the undisputed King of the Light Heavyweights. In Stevenson’s first defence (September 28), former world champion Cloud (24-1, 19 KOs) was supposed to be a major test for the new world champion. It was quite different as the powerful left-hander pressured Cloud from the start, forcing the challenger to retire at the end of the seventh round. Stevenson gave Cloud a boxing lesson, displaying brilliant skills, finesse, speed and defensive power. Stevenson is on a nine-fight win streak, all ending by knockout, the last time he went the distance was back to 2007, yeah he can bang!

Bellew turned professional in 2007 going on to win the British and Commonwealth titles and he still holds the WBC Silver Belt. He has suffered only one loss to then WBO world champion Nathan Cleverly in 2011. He earned his mandatory challenger position by taking the measure of Isaac Chilemba on points in a WBC title eliminator this last May 25 in the co-feature a Carl Froch vs. Mikkel Kessler headlined card in the UK. Among his notable victories was a ninth-round technical knockout of the usually durable Colombian Edison Miranda (35-7, 30 KOs).