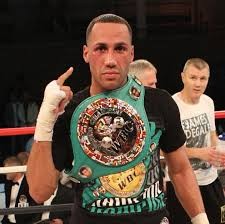 James DeGale announced he will be back in the ring on November 6th when he defends his WBC silver super-middleweight belt at the Glow, Bluewater in Kent, an opponent has not yet been confirmed. Chunky says he is looking forward to getting back in the ring and believes he will face the winner of Groves-v-Froch within the next six months.

“I can’t wait to get in there and put on the kind of display where people take note and see that I’m ready and willing to fight the best, I’ll put on a great performance for the fans.” DeGale said.

The Olympic gold medallist, last fought in June, a fourth round retirement win over Croatian Stjepan Bozic. The Londoner’s professional record currently stands at 16 wins, 11 by KO, with just the one defeat to George Groves in May 2011. DeGale lost his British title to Groves via a majority points decision, a result he still disputes.

After that defeat to Groves, DeGale came back to win the European title, he has won his last 6 fights, currently holds the WBC’s silver belt and is a candidate to take on the winner of Carl Froch and old foe George Groves, who meet on the 23rd November at the Manchester Arena. DeGale is eyeing that fight, but is excited about the world super-middleweight picture as a whole and where he fits into it.

“I look at the Froch v Groves fight and I know that in the next six months it’s likely that I’ll fight the winner of that one, so it really is exciting times.” added DeGale.

“When you look at the super middleweight division, it really is a great time, as there are no easy fights, no easy world champions,

“You’d have to say Andre Ward is number one and then you’d probably have to say it’s Carl Froch, but when you look at the list of other fighters in the division, the likes of Mikkel Kessler, Thomas Oosthuizen, Lucian Buté, George Groves, I think it’s very difficult to say who number three is, who number four is.