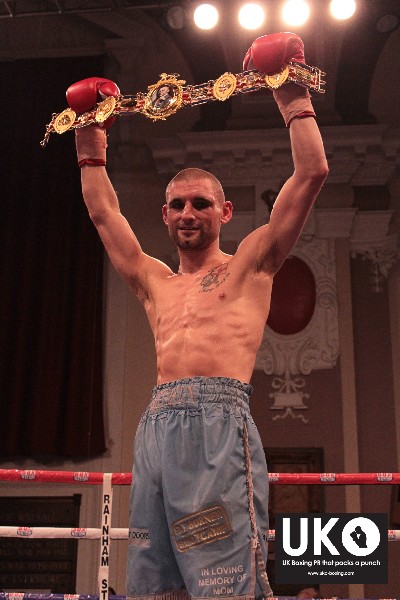 Gethin looking to prove his championship credentials against Crolla

Martin Gethin will make the first defence of his British Lightweight title against former holder Anthony Crolla on the undercard of Carl Froch’s WBA and IBF Super Middleweight title defence against George Groves at the Phones 4u Arena Manchester on November 23.

Gethin, 29, will be making the first defence of his Lonsdale belt he won by beating Ben Murphy in his home town of Walsall in January. Gethin went on to fight in a IBF world title eliminator against Ammeth Diaz in May, but was stopped in the 7th round by the experienced Panamanian.

“I can’t wait for this one,” Gethin told www.uko-boxing.com. “It seems a long time ago since I won the British title and I’m more than ready to defend it.

“I learnt a lot from the Diaz fight. Domestically, the lightweight division is full of very good fighters and Anthony is one of them. However, I’m the British Champion and I’m going to show people why against Crolla.”

Mancunian Crolla, 26,  is looking to win the British lightweight belt for the second time having having knocked-out John Watson in February 2011 to claim the then vacant title. Crolla is on the verge of pushing onto world level after hitting recent good form and hopes this will be his last domestic fight before challenging for World titles.

“It’s always a great honour to box for the British title,” said Crolla. “Martin’s a cracking boxer and I am sure it’ll be a very good fight, but I am aiming to win and win well and move onto the World stage in 2014.”

“Everybody loves a domestic match-up, especially in the Lightweight division, and Anthony Crolla versus. Martin Gethin should provide fireworks in Manchester,” said promoter Eddie Hearn. “We have big plans for Anthony in 2014 and victory over Martin will see him mark the end of a thrilling domestic run and stand on the verge of a World title shot.”

Also on the Manchester show is Liverpool’s Rocky Fielding who will defend his Commonwealth Super Middleweight title against undefeated Guyanese mandatory challenger Lennox Allen. Fielding won the title with a first round stoppage win over Mohammed Akrong in Liverpool in September while New York-based danger man Allen holds 17 wins with ten inside the distance.

“This is a huge step up for Rocky and I take my hat off to him and Oliver for taking the mandatory challenge,” said Hearn. “Lennox Allen is a talented fighter with a rising reputation in the States and it’s a big test for Rocky.”

The Matchroom Boxing promoted show will be shown live on Sky Box Office.